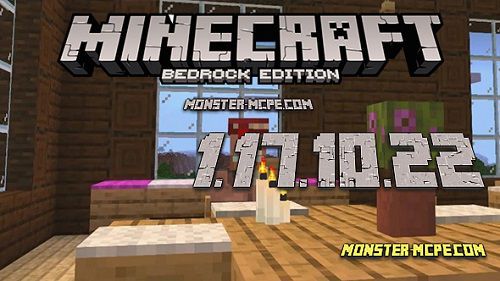 The day before yesterday, we presented you with an update that Mojang had to postpone for technical reasons from last week to the current one, and today, however, as always, we present you with another release of a new test update, which is Minecraft PE 1.17.10.22! The new test version of Minecraft PE 1.17.10.22 does not have any issues with Android, so everything is also available to all users of Android devices, as well as to Android operating systems. In the new update, the developers of Mojang studio added a light source such as candles, and also made thirteen new changes, as well as twelve technical changes.

Let's take a closer look at the features of this update below.

The first thing we will consider with you is, of course, the aforementioned light sources, namely candles! Candles are very useful decorative elements that have both unpainted variations and colored ones and can be in one of sixteen colors.

Candles can be lit with a flint and extinguished with water or some other liquid. Players can also place them in a block of water, but they will not burn.

This item can be crafted by the player using threads and honeycombs. Also, players can place this item in groups, but only up to four candles in a group. Players can decorate their holiday table by placing candles on the cake. Also, players can change the color of the candle using the crafting table and dye.

Now let's look at the changes that the Mojang developers have made in the new version of Minecraft PE 1.17.10.22. In total, thirteen new changes were made that related to the gameplay of the Minecraft world. Below you can see the most significant ones at our discretion:

1. Now mobs that are swimming or are in water and underwater (and in other liquids) will receive damage from falling Anvils and Stalactites;
2. Now, when passing the web, players will no longer receive damage before falling to the ground;
3. When descending on Powder Snow, use the same button as on Scaffolding if the player is wearing leather boots;
4. Players can no longer collect fish in empty buckets;
5. Axolotls will only appear in complete darkness;
6. Iron Golem and Evoker will no longer attack at peaceful difficulty;
7. The glowing squid changes color to a darker one when dealing damage to it;
8. Mobs do not attack Goats in return;
9. The animation of the player's head when using emotes have been fixed.

And the last thing worth paying attention to is Technical changes, but this topic will be of interest only to addon developers. The developers of the Mojang studio have made twelve new technical changes for players who are developing add-ons, as well as testing the Minecraft world.
Facebook
Twitter
Pinterest
Minecraft PE 1.17.10.22 for Android
minecraft-1-17-10-22-xbox-servers.apk
Download free[123.96 Mb]

Related News:
Minecraft PE 1.17.10.21 for Android
The developers have released a test version of Minecraft 1.17.10.21,
Minecraft PE 1.17.0.54 for Android
Mojang developers have released a new beta version of Minecraft
Minecraft 1.17: The Caves and Cliffs Update
Greetings to all fans of the Minecraft world. Today we'll tell you
Just Lights Add-on 1.16/1.15+
We present you with a new addon that adds new items to the Minecraft
Comments (0)
Commenting