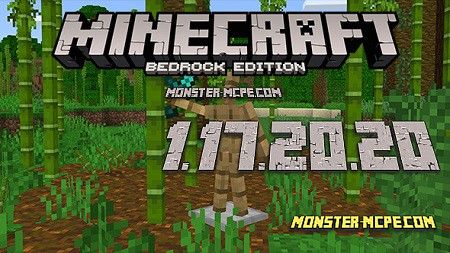 We know you've been waiting for this, namely a new update that every week on Wednesday or Thursday is presented to us by the developers of the Mojang studio. A new update, Minecraft PE 1.17.20.20, was released last night with new fixes and changes to the gameplay.

In the new update, Mojang has fixed over thirty different bugs and made six new changes related to the technical aspects of the game. Let's take a look at all the features of the new update below.

As mentioned earlier in the new update, the developers of Mojang studio have made more than 30 new fixes, below you can see some of the most significant in our opinion. 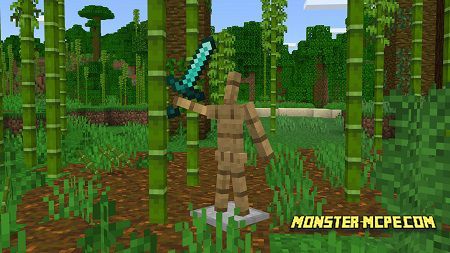 1. Now swords can break bamboo again after the first strike;
2. A setting has been added called Explosion of Respawn Blocks. This setting allows players to avoid exploding such blocks as Anchor of Respawn and exploding of beds;
3. Now worlds with activated experimental settings such as Caves&Cliffs will have the same mechanism of spawn in the same way as without experimental settings;
4. The functions of the sliders of toggle sounds in the Minecraft settings have been changed;
5. Bugs related to the UI (user interface) have been fixed;
6. Parity of the mobile version of the Minecraft Pocket Edition game with the computer version of the Minecraft Java game:
— The spawn rate of mobs in the Nether World has been reduced from thirty-forty to fifteen-twenty mobs;
— Click sounds when interacting with a block are changed by the volume slider of the Blocks;
— When switching Levers it has new sounds as it was changed.

1. The disappearance of items when painting a block of Shulker Box through the crafting menu has been fixed;
2. The leaves of trees such as spruce and birch no longer change color depending on the biome;
3. If players are using the bucket of powder snow in the cauldron of powder snow will not appear a block of powder snow and the process will be unsuccessful;
4. Now the sounds of the Bucket of water was changed to a cauldron that is fully filled;
5. Now bees can pollinate the Cave Vine;
6. The enchanting table got seventh light level;
7. The bug with the incorrect falling of the blocks of Pointed Dripstones has been fixed;
8. Now players can place a block of Powder Snow into the Dispenser;
9. The spelling of the text when placing the Plates on the block of Rooted dirt has been fixed;
10. Targets send a Redstone signal;
11. The / message and / tell commands work without using cheats;
12. Mobs do not disappear when teleporting from one dimension to another;
13. Fixed the position of the Shield in the second hand;
14. Fixed a bug with Boots with the Soul Speed effect;
15. From now on the mobs such as baby goats have no such an element of appearance as horns;
16. The diamond picks in the chests of Hoglin Stalls are always enchanted;
17. Fixed the position of the Bubble Column when loading from the Structural Block.

As mentioned earlier, only six changes were fixed that related to the technical aspects of the Minecraft game. They are mainly related to the development of add-ons and testing the game. More details can be found on the official source.

Related News:
Minecraft PE 1.17.10.21 for Android
The developers have released a test version of Minecraft 1.17.10.21,
Spear Sword Texture Pack
We present you with a new texture pack that adds new textures for
Emerald Sword Add-on 1.16/1.15+
We present you with a new addon that adds not a simple sword but an
Vibe’s Tweaks #1: Sword Texture Pack
We present to your attention a new cool pack of textures that adds
Comments (0)
Commenting