Today is Thursday, what does that mean? It is true that we will receive a new update today. Every Minecraft fan is looking forward to this day, as on this day the Mojang developers release new updates to us every week, with new fixes and changes for the Minecraft world. Mojang developers have released a new test version of Minecraft PE 1.17.0.58 for all users of Android operating systems. This update includes 18 new changes and stability improvements. In general, this is not a big update, but very significant due to the fact that it brings to the game. Let's take a look at all the new changes introduced by the new Minecraft PE 1.17.0.58 update.

In total, 15 new changes and fixes have been made for the upcoming Caves & Cliffs update. Let's take a look at a list of some of the changes below:

1. Now water will drip only from the tip of the Stalactites;
2. When the Cauldron is full, the water drips from the Stalactites a little more often;
3. If the base of the stalactite formation has been broken, the stalactite will also break;
4. The background color in the game settings has been changed;
5. The minecart no longer blocks the player's view;
6. Due to the map in the glowing frame, the nearby objects no longer glow;
7. When a frame with an object is destroyed, not only the frame is now dropped;
8. The saving of the data of the copied blocks has been fixed;
9. The bug due to which the furnace worked without fuel has been fixed;
10. Fixed a bug due to which the map, when created, was centered on the player's position;
11. Small Axolotl mobs no longer eat a bucket when fed with a bucket of tropical fish;
12. The buckets from which the Axolotls were fed can now be stacked with other buckets;
13. The ripple effect on portals has been fixed;
14. Bubble pillars on magma blocks have been fixed;
15. The operation of the / execute command has been fixed. 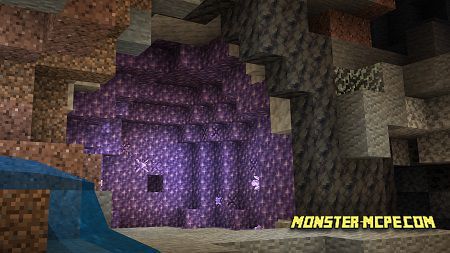 In total, 3 new technical changes were made. Basically, these are the changes that add-on developers need. Let's take a look at them below:

1. A bug was fixed that related to characters that, in turn, did not display the saved text when placing;
2. Now a filter like has_equipment can support data values again;
3. Added a new field to the component minecraft: ageable, the field is called: transform_to_item. If the field is filled with the name of some object, the object will be returned when using any of the feed_items. The same principle of transform_to_item works with the component in minecraft: breedable.

Related News:
Cave Enhancements Add-on 1.16+
We present to your attention a large and fairly voluminous Cave
Cave and Cliffs Concept Add-on 1.16+
Are you already looking forward to the upcoming Cave and Cliffs
Minecraft 1.17: The Caves and Cliffs Update
Greetings to all fans of the Minecraft world. Today we'll tell you
Minecraft PE 1.18.0 for Android
We present to your attention the new version of Minecraft Pocket
Comments (0)
Commenting