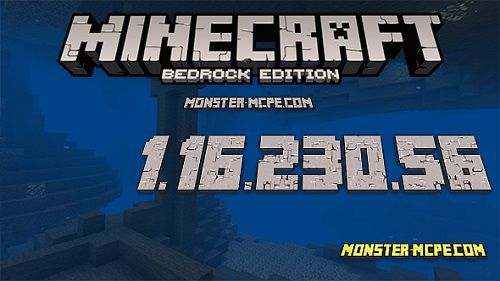 The developers have released version 1.16.230.56 of Minecraft on Android. In this update changed the generation of caves and fixed 5 bugs.

Fixed 5 bugs, of which 4 fixes make the game more stable.

Also fixed the skin editor, now the skin does not show extra pixels.

Fixed the crash that occurred when treating a Zombie inhabitant in another dimension if the player has not returned to the Normal World since entering the world.

Fixed a crash that would occur when generating jungle biomes when the "Caves & Cliffs" option was enabled.

Fixed a crash that could occur when switching between your own and the rest of the Character Editor items.

Fixed a bug that caused Character Editor items not to apply properly to characters.

Related News:
Minecraft PE 1.16.230.54 for Android
Today, the developers of Mojang surprised us again with a new test
The Crazy Caves – Caves & Cliffs Add-on 1.16+
Would you like to diversify your Minecraft world in some interesting
Cave Enhancements Add-on 1.16+
We present to your attention a large and fairly voluminous Cave
Minecraft 1.17: The Caves and Cliffs Update
Greetings to all fans of the Minecraft world. Today we'll tell you
Comments (0)
Commenting