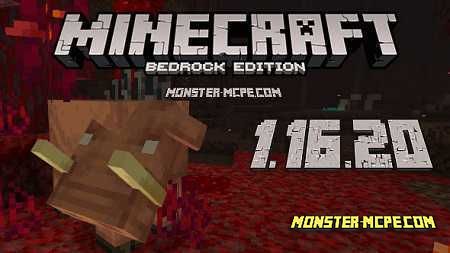 Download Minecraft PE 1.16.20 for Android with a working Xbox Live: new achievements, an updated interface, rebirth in the Nether and other gameplay improvements!

Mojang Studios has released the next version of Minecraft 1.16.20 Nether Update. In this update, the team made various graphical and gameplay changes.

In the new Minecraft update 1.16.20, players will see a new block in game.

It will allow players to finally get the opportunity to respawn even in the Nether. When player use beds, an explosion occurs, and both in the Hell and in The End. 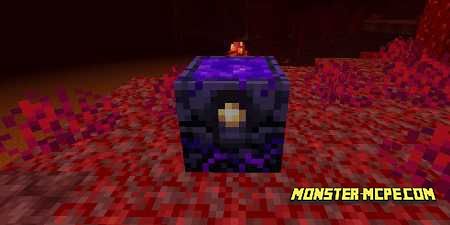 To create a revival anchor in the Nether you have to get 2 types of blocks:


You can find Crying Obsidian in the chests near the destroyed portals.

However, in addition to the costs of creation, there are also expenses for its maintenance. The Respawn anchor will have to be charged every time, using Glowstone blocks, you will need 4 pieces.

Be careful, because when player using this block in the Overworld or the End, an explosion will occur.

With the addition of an updated dimension to Minecraft PE 1.16.20, with different biomes and new activities, the developers did not miss the chance to improve an achievement system.

In Minecraft PE 1.16.20 there are wide range of achievements that will allow players to better explore the Nether.

The Mojang team has done a lot of work to improve the user experience when interacting with the achievements list by updating it's design.

Now it will be much easier for players to view result of their work, because for this you just need to swipe on the chosen achievement.

Related News:
Monster Hunter (Bedrock) Addon 1.15+
We present to you a very interesting addon that adds new creatures to
Redstone Mechanic Evolution 1.14/1.13+
A new add-on that adds new creatures to the game. This add-on, unlike
Minecraft 1.15.0 for Android
Wow, the new version of Minecraft Bedrock Edition 1.15 has been
Redstone Mechanic Addon
Increase your playing skills and get a great experience in game,
Comments (0)
Commenting