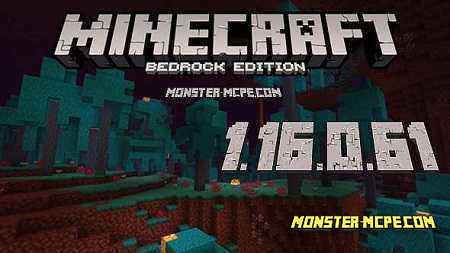 Dear friends, meet the new test version of Minecraft 1.16.0.61 for Android with a working Xbox Live. You are waiting for the crimson and warped forests, basalt deltas, the soul sand valley, as well as a various of improvements to the gameplay!

Finally, the developers from Mozhang have published a new version of Minecraft 1.16.0.61, which contains 4 new biomes and various new mobs and game improvements.

The Minecraft PE 1.16.0.61 update made it possible for developers to implement in game 4 biomes for the Nether, as well as preserve the original terrain.

Forest biome of the Nether, in which instead of trees you will find huge mushrooms with glowstones.

Interesting fact: The warped forest can be the safest place in Nether, because only endermen can spawn in it. 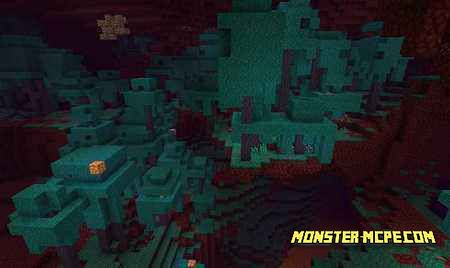 Another forest biome that famous for it’s impressive size. As you probably already noticed, the whole forest is made in red colour. Here you can meet the Piglins, as well as the Hoglins, and Piglins can be useful if you wear gold armor before the meeting. 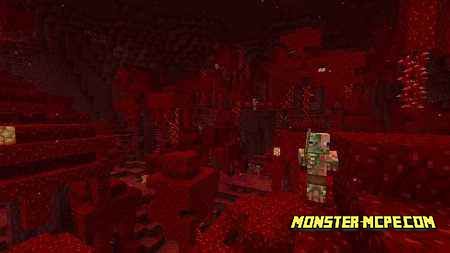 The area is made in volcanic style, where every wrong step can be the last. Here you can get in magma cubes or easily fall into lava.

An interesting fact: in this biome, most often you can meet new mobs called striders. This mobs will allow you to move around the lava. A cave-like biome can be one of the most dangerous biomes. If you decide to walk on this biome in Minecraft Bedrock 1.16.0.61, you will see only mountains made of soul sands.

This biome can be dangerous because of mobs that inhabit it, There are a lot of ghasts and skeletons. The most common ones are: