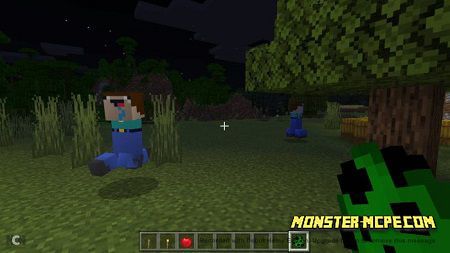 A new addon using which you can add new creatures to your Minecraft world, such as creepnoobs! Do the new creatures remind you of someone you might have seen in the game? We think so! This addon adds a kind of creeper called creepnoob. These creatures can fly, explode and then turn into a chicken.

Where did they come from?

Creepnoobs are creatures that are the ancestors of common creepers. These creatures for many thousands of years improved their flying skills, they did this by jumping from a height over and over again. Only at night creepnoob will be dangerous, during the day this creature will again become a chicken.

In other words, it is a creeper who has the ability to fly and turns into a chicken in the afternoon!

Related News:
More Tools Add-on 1.18
Has it ever happened that you have a lot of resources in your
Cave Enhancements Add-on 1.16+
We present to your attention a large and fairly voluminous Cave
MB’s More Creepers Add-on 1.16+
Do you like creatures like Creepers? These are green hostile kamikaze
Golden Utilities: Transport Any Mob and Much More Add-on
Have you ever faced the problem of transporting mobs or maybe you
Comments (0)
Commenting