Imagine that your character is in full defense, while having the best armor, but for your enemies, it seems as if it is not like your character is completely defenseless ... We will talk about invisible armor! This is a new addon that adds invisible armor to the game. What does it mean? This means that after you dress them, they will not be displayed on your character, which means that this will not stop you from playing your character with his individual skin, nothing more will cover his appearance. At the same time, it will protect you and will be a big surprise for your enemies! All the advantages of armor remain the same, they simply do not appear on you.

All armor listed below will be invisible: 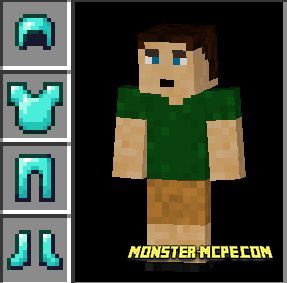 ATTENTION: The dragon's head will not be invisible and objects like this.

We also draw your attention that the armor that is on the stand for armor and other mobs will also be invisible!

Related News:
Download Minecraft Java 1.14
Everyone is looking forward to a new update for everyone's favorite
The Redstonist Bedwars (PvP) (Minigame)
Very extraordinary mini-game, where the main aim is to save your bed
Download Minecraft PE 2.0.0 apk free
A lot of players of PC, X-Box, PlayStation, and of course of mobile
Colored Elytra Resource Pack
Resource pack for those who likes to play using elytra wing, and
Comments (0)
Commenting