A new and very exciting add-on that adds a new creature to the Minecraft world, but this time it is not just a creature, but the Boss Hydra! This is a new boss who will be extremely difficult to kill, as he has a large amount of health and a unique attack. This creature will breathe poisonous gas on its opponents, which can poison you and any other creature, and then completely EXPLODE it! Hydra will not give anyone a chance to survive and destroy everyone in its path, any living creature.

Able to destroy blocks and spit with poisonous explosive gas!

He deals 15 damage and poisons his opponent. This is a very evil monster!

With the help of this add-on, you can diversify your world and add probably one of the most powerful bosses to the game. He is very strong, which gives you the opportunity to challenge your strengths and skills. The great challenge for those who like something new and challenging! This add-on is presented as a Beta version, so we do not recommend using it in survival mode.

The new boss also has its own unique animation. 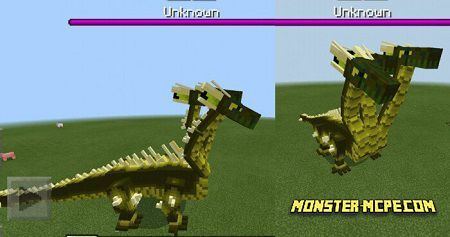 Below you can watch the video:

Related News:
Download Minecraft Java 1.14
Everyone is looking forward to a new update for everyone's favorite
Aquatic++ Add-on 1.13/1.12+
Every day a lot of players noticed that while playing Minecraft, and
Magent And Pagent Add-on (1.8+ Only)
This addon adds a new creature to Minecraft, which are Pagent and
Redstone Mechanic Addon
Increase your playing skills and get a great experience in game,
Comments (0)
Commenting