A new, and for many players, very necessary pack of behavior for horses, namely for horses that enter the water with you. Previously, horses kicked off the player which is their rider exactly when it enters into the water. A new behavior pack called No More Water Dismounts! The pack itself is very simple and removes the inconvenience that often interferes with players in survival mode.

From now on, the problem with kicking off the player who is riding the horse will be in the past. Now a player who has entered into the water on a horse can continue to move, but his horse may die because in the water it will begin to suffocate and can drown. We also draw your attention to the fact that after death, you will also be riding on a horse. You can save her by removing her saddle.

From now on, the river will not be a big problem for you in survival mode! 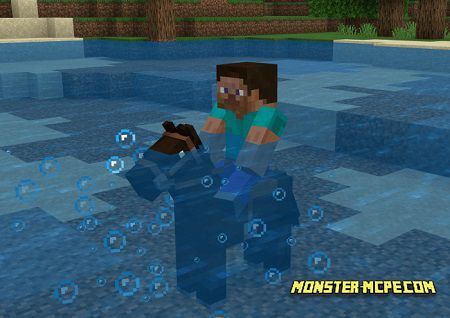 Related News:
Download Minecraft Java 1.14
Everyone is looking forward to a new update for everyone's favorite
Download Minecraft 1.11.0 for Android (Release)
Minecraft Pocket Edition 1.11.0 — an update of the mobile version of
75 Ways To Die Map (Puzzle) (Minigame)
Mini-game where each player in order to get to the next level should
Download Minecraft PE 2.0.0 apk free
A lot of players of PC, X-Box, PlayStation, and of course of mobile
Comments (0)
Commenting