For those who do not know, this fictional green character is a human-like creature covered with green fur. The Grinch lives on the top of the mountain with his dog Max. From the mountain he watches the merry people every time the Christmas holidays come; Moreover, the Grinch is annoyed with happiness and fun, since the Grinch himself gets pleasure and fun from the fact that he spoils the holiday mood for all residents.

The new addon allows players to add several variants of the Grinch to their Minecraft world, in his usual appearance and in the costume of Santa Claus, also his dog Max and several items in the form of gifts.

Stop the Grinch and don't let him steal your Christmas!

In the world of Minecraft, you can meet a new creature known to everyone as the Grinch. These creatures are hostile and aggressive towards players and other living creatures. The Grinch has 20 health points and deals 4.5 damage to its target. After death, cookies are dropped. Below you can see what this creature looks like: 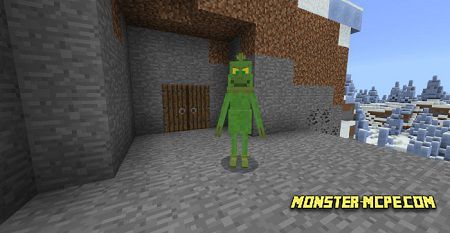 The second type of Grinch is wearing a Santa Claus costume. This type of creature also spawns in different parts of the Minecraft world, and unlike the usual Grinch, these creatures are neutral. Using a diamond, players can tame such a Grinch.

We also draw your attention to the fact that this type of Grinch has 75 health points and deals 9 damage to its target. After death, cookies are dropped. Below you can see what this creature looks like:

As mentioned earlier, in addition to the Grinch, his best friend will also be added to the Minecraft world, this is his dog, Max. This animal spawns in different parts of the Minecraft world and has the same behavior as a wolf. Players can tame this mob using a bone, after which Max will protect you from all hostile creatures.

In the wild, Max has 20 health points and deals 4 damage to his target.

When tamed, Max has 50 health points and deals 4 damage to his target. Once tamed, it follows the player everywhere and protects from hostile creatures.

And the last thing is gifts, these are small gift boxes that will be found in the world of Minecraft and have different interesting loot. In general, 5 types of such gift boxes will be added to the game. 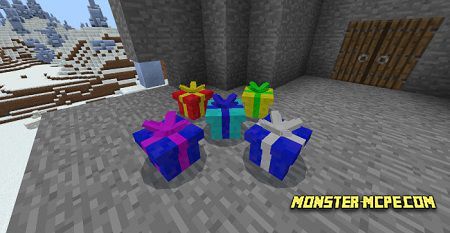