Players can also craft these types of crafting tables during survival.

These craft tables will now replace the old and boring simple tables made of wood. Players can craft them using four types of wood on a special table called More Stuff!

The new More Stuff table is a new type of table that is designed so that players can craft new items in this add-on. It also allows players to avoid confusing crafting recipes. You can use this table to craft seven new types of crafting tables.

In order for the player to craft a new More Stuff table, you need to use four trees of any type. Below you can see the recipe for crafting this table:

In the future, after the player has already crafted the More Stuff table, he can craft one of the available other crafting tables for decoration, namely:

All new crafting tables will have the same colors as the corresponding type of wood from which it was made. 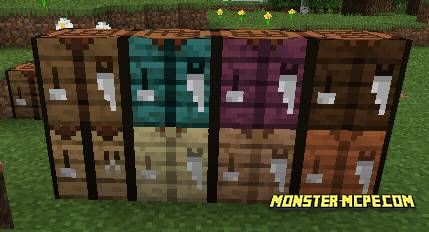 Related News:
Jurassic Addon
Jurassic Addon - this is a fairly large and voluminous addition that,
Pixel Gun Melee Weapons Add-on 1.16/1.15+
Have you ever played the Pixel Gun game? For those who do not know
World Animals Add-on 1.16/1.15+
Would you like to add more different animals to the Minecraft world?
Palm Trees Add-on 1.14/1.13/1.12+
A new and very interesting addon that adds new trees to your
Comments (0)
Commenting