Legend about Garuda come true in MCPE, from now, you can see this mythical king of birds here. Mostly it is a very big bird (replaces Phantom mob) in MCPE. This bird has new abilities, that is why, for players will be so hard to escape from her.

In last beta version of Bedrock, we saw new phantom mob, from now, you can see a new giant bird — Garuda. He is very strong, that is why you should be well equip and ready to fight. In case if you will defeat him, you will get raw chicken and feathers.

You can meet Garuda in your worlds or with spawn eggs. 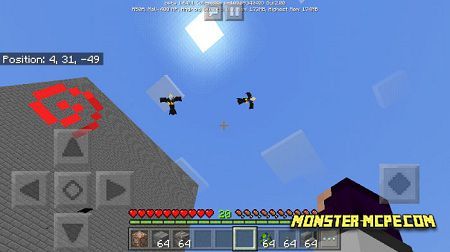 Related News:
Download Minecraft PE 2.0.0 apk free
A lot of players of PC, X-Box, PlayStation, and of course of mobile
Goldfen Legend (ROTAR 2) (Adventure) (CTM)
This is multyplayer map, in RPG style. Here you will get exciting
Goldfen Legend (ROTAR 2) (Adventure)
Four players can join this rpg map. Adventure style of this map makes
Redstone Mechanic Addon
Increase your playing skills and get a great experience in game,
Comments (0)
Commenting