Have you ever seen the Mammoth? Of course not, they became extinct millions of years ago. Perhaps you could only see them in different cartoons or films, but what about these huge and majestic creatures in the Minecraft world ?! If you like them and would like to add such creatures to your Minecraft world, then the new addon is what you need. These days these creatures look like big hairy elephants! They are funny, but at the same time very strong and can crush the player with ease. Let's take a closer look at these creatures below.

These large and powerful creatures inhabit areas such as snowy biomes. As mentioned earlier, these creatures are very strong, and in order for you to be able to tame them, you need to be extremely careful. You can tame them using a block of hay. Once you have tamed them, you can ride them. Please note that you do not need a saddle for this. Also, your friend can sit on the Mammoth with you. After you have tamed this mob, you can also breed them using the special kelp block. After that, you will also have the opportunity to get a tamed baby mammoth. 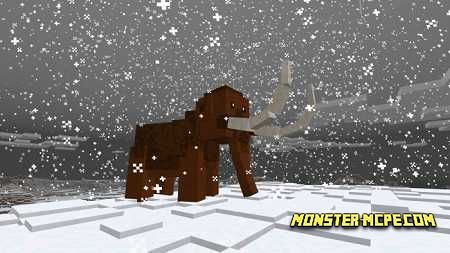 These large and powerful creatures have large and strong tusks. They have similar jumping animation like real Mammoths. Will attack creatures like Skeleton Stray. These creatures only live in snowy biomes. You should also beware of them if they are not tamed as they can attack the player. In case your tamed mammoth has been injured, use tall grass, seaweed, or kelp to heal it.
Facebook
Twitter
Pinterest
Mammoth Add-on 1.16/1.15+
mammoth-add-on.mcaddon
Download free[434.82 Kb]