Recently, more and more players began to create add-ons that add different planes to your Minecraft world, this add-on is no exception as it adds a new type of aircraft called Alpha Z1. Does he remind you of anything? Yes, you could see this plane before in such a famous game as GTA Online. This is not a heavy and fast aircraft that can perform different air figures in the sky, in other words, tricks. In addition to tricks in the sky, players can simply use the plane to get from one place to another in a short period of time.

Have you noticed that all existing vehicles in the GTA game have borrowed models from real life and real vehicles? A new aircraft is no exception. The model of this aircraft was borrowed from a model such as the Reberry 3M1C1R. Unfortunately, there is no more detailed information about where this aircraft was produced in real life.

The new Alpha Z1 aircraft has only one seat (as you already understood only for the pilot). It can fly at high speed. Sounds and animations added.

Alpha Z1 aircraft is available in only two colors:

1. Silver, what the plane looks like in the game you can see below:

2. Gray, what the plane looks like in the game, you can see below:

To get the new Alpha Z1 plane, the player needs to use a spawn egg from a creative inventory.
It is very simple to control the Alpha Z1, to fly up into the sky, look up, to land on the ground, look down. 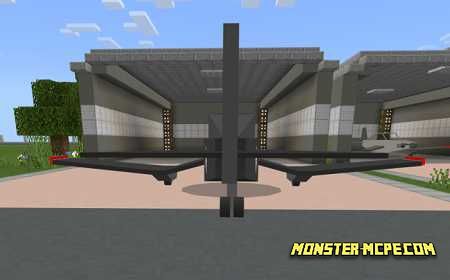 Related News:
Plane Add-on 1.16/1.15+
We present you with a new cool addon that adds airplanes to the world
Commercial Airliner / Airplane Add-on 1.16/1.15+
Do you like flying in the world of Minecraft? And what about flying
Vanilla Vehicles Addon 1.6+
This new addon adds new vehicles for MCPE, here is 11 types of a
Controllable Airplane Addon
Controllable Airplane Addon is one of the most popular add-ons for
Comments (0)
Commenting