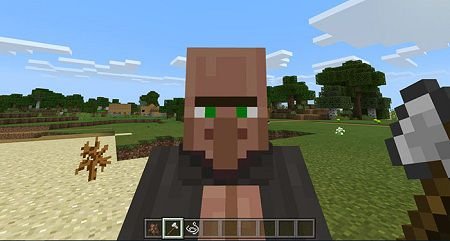 Vindication Villager Addon creates new behaviors for one kind of characters in the game world of Minecraft Pocket Edition. The idea of the supplement is to protect the villagers of the cubical universe and help them resist the attacks of aggressive creatures in Minecraft.

Default villagers can develop into Vindicator Villagers when you install this mod. Each of these characters will have an item that will help them fight monsters. The villager will have the Stone Ax.

You probably know that the Iron Golem can also be trained, but with Villager everything is much easier. Just take the weapon in your hand and press it to make it strong.

Get the iron ax with the help of a crafting recipe. Take 2 sticks and 3 iron bars to make a metal ax.

For the iron golem 27 iron ingots and heads may be needed, it is a more costly process.

If you have a limited amount of resources, but you want to create a creature that will guard you and protect you from attacking enemies, then just use this addon.

Press with iron ax to the villager and he will become a strong protector for you!

By the nature of his behavior Vindication Villager is a neutral character, he will be peaceful until you begin to attack other villagers.

When your character attacks different monsters, Vindication Villagers will be able to hurry you to the rescue. The farmer and the librarian will no longer be calm at the time when a zombie or spider attacked you, the butcher and blacksmith will also come to the rescue! If a resident with an iron ax gets lightning, then he too can turn into a witch, as is usually the case with the usual villager in Minecraft PE.

Related News:
Magent And Pagent Add-on (1.8+ Only)
This addon adds a new creature to Minecraft, which are Pagent and
Train Add-on
This addon implement a new type of train into MCPE, it is similar to
Super Random Behaviors Addon
Have you ever been on a war? Here, you can feel this battle
Redstone Mechanic Addon
Increase your playing skills and get a great experience in game,
Comments (0)
Commenting