Do you like turtles? If so, then you will like the new addon which adds four new types of turtles to the Minecraft world. New turtles will inhabit all biomes where there is a sea. From now on, all marine biomes will be even more interesting. Let us consider below all the new varieties of turtles that will be added to your world.

New types of turtles:
1. Marine Olive ridley: This type of turtles is one of the smallest that will live in the world of Minecraft. They live in all marine biomes. After death, seaweed drops. Has 13 health points. It spawns in all types of oceans. Eats only seaweed. Below you can see what this type of turtle looks like: 2. Marine Hawksbill: This type of turtles is one of the rarest that will live in the world of Minecraft. Afraid of the players, so when the player sees the turtle will float away from you. After death, cod drops. Has 36 health points. It spawns only in the deep and warm oceans. Eats only cod. Below you can see what this type of turtle looks like:

3. Green: This turtle has 27 health points. Eats only tropical fish. It lives only in warm oceans. After death, drops tropical fish. Below you can see what this type of turtle looks like: 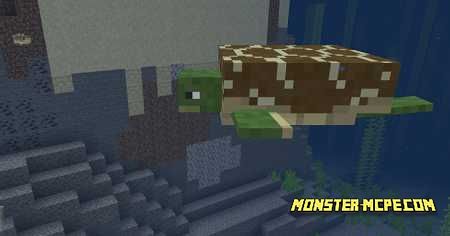 4. And the last one is Leatherback: This is the largest turtle that will live in the Minecraft world. Players can ride her, but so far they cannot tame her. This type of turtles is neutral towards the players, but it is worth noting that these turtles can cause 5 damage. After death, pufferfish are dropped. Has 47 health points. They live in deep and warm oceans. Eats the only pufferfish. 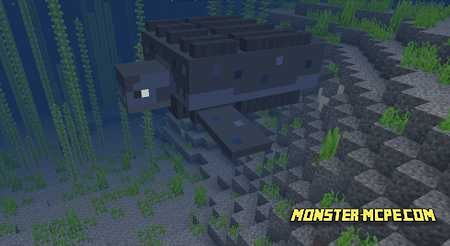 This addon was created to diversify marine biomes and fill them with interesting mobs and new life.

Related News:
World Animals Add-on 1.16/1.15+
Would you like to add more different animals to the Minecraft world?
Monster Hunter (Bedrock) Addon 1.15+
We present to you a very interesting addon that adds new creatures to
Download Minecraft Java 1.14
Everyone is looking forward to a new update for everyone's favorite
Aquatic++ Add-on 1.13/1.12+
Every day a lot of players noticed that while playing Minecraft, and
Comments (0)
Commenting