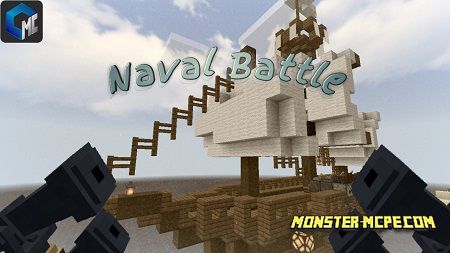 Do you like warships, namely old frigates that fought using their firepower in the form of large cannons? If so and you want to become a real sea pirate, or just fight with your friends, then the new map (mini-game) is exactly what you need. The new map is called Naval Battle.

Here, each player can become a real pirate and fight other players using the ship's cannons or his own tactics using a bow or sword. Create a grandiose naval battle on the seven seas and prove that you can be called the true warriors of the seas of the Minecraft world!

Related News:
Jurassic Addon
Jurassic Addon - this is a fairly large and voluminous addition that,
Pirate’s Adventures Map
Would you like to become a pirate? If so, then you have such an
Terraria Pirate Captain Boss Add-on 1.15/1.14+
Would you like to add a new rival to your Minecraft world? If so,
Crossbow vs. Bow Map
We present you with a very interesting and fascinating mini-game for
Comments (0)
Commenting