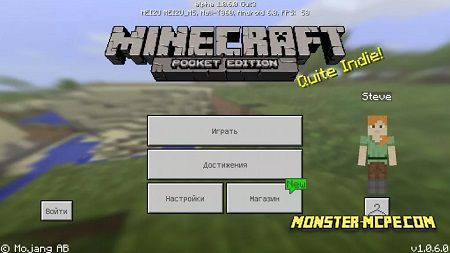 New update Minecraft Pocket Edition 1.0.6. This version is available for all Android devices. What is interesting about this update? Firstly, these are command blocks, new teams, sets of different skins, as well as bug fixes.

This is a fairly significant version, because thanks to this version of Minecraft, players received the long-awaited command blocks and all those additions that were necessary for a more exciting and interesting game.

This feature is unique in the Minecraft world because thanks to it the player is able to control the world by pressing just a few buttons.
For those who do not know what a command block is, this is a function that allows the player to enter the desired team into the command block in order to be able to influence the game, namely starting from the weather and ending with mobs.

After the player enters the necessary characters or values, it is enough to activate the block with the help of the Redstone signal.

If a player wants to receive a command block, he should enter such a command into the Chat (in Creative mode) /give @p command_block.

In Survival mode, the player does not have the opportunity to interact with the command block, all you can do is activate it.

In the Minecraft world, there are two different types of command blocks, the first is called cyclic, and the second is a chain. Each of these types of blocks has its own functions. 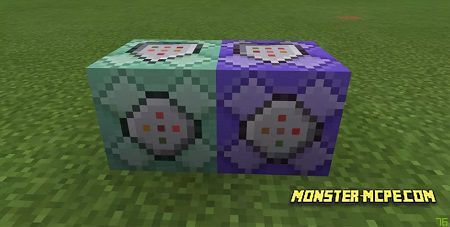 In the new version of the Minecraft Pocket Edition 1.0.6 game, players can use the new types of commands in the Game Chat or in the command block. Below you will see the whole list of useful commands, each of which will be very useful to you. In order for the player to activate one of them, enter the following text: 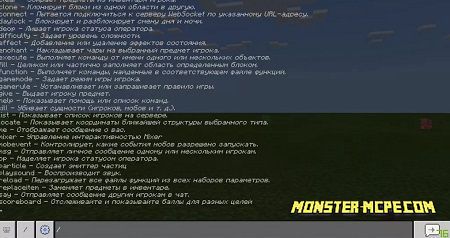 It is not for nothing that we did not add another command to this list that looks like this /gamerule, this is a special command that sets the game rules. This command allows the player to disable the change of weather, time of day, the spread of fire, the destruction of the explosion and much more. 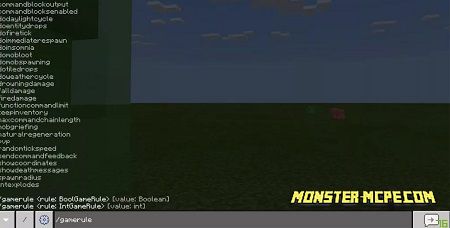 In the Minecraft marketplace, new maps and new skins for characters have been added. Both skins and maps could be bought by the player in the trading platform of the game. At that time, this was only the beginning of improving the marketplace of the game by the developers of the Mojang studio. Perhaps we all will wait until free and original content is available there. Previous skins were created for the New Year, below you can see how they looked.