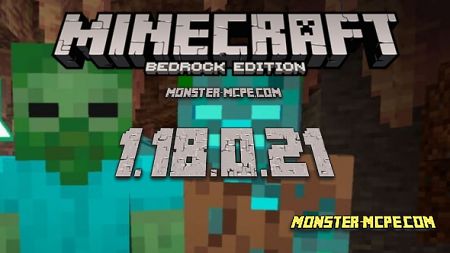 The developers have released a test version of Minecraft 1.18.0.21 on Android. In this update fixed 24 bugs, made 10 common and 5 technical changes. However, users encountered problems during installation.

The game stopped displaying old worlds, because worlds, mods and other files are stored in the folder Android/data/Com.mojang. Copy the contents of the /games/com.mojang/ folder to /Android/data/com.mojang/minecraftpe

Changes
Introduced 10 updates. Main:
Updated the distribution of ore in the lodes.
Changed relative size of biomes to match version 1.17
Increased average size of biomes
Changed the location of biomes
Increased the frequency of the appearance of underwater Magma
Increased the number of Treasure Halls, especially below zero level
Villages are more spread out.
Zombies and Drowned will spawn in Karst Caves
Goats will not spawn in the Stone Heights
Updated the frequency of Lava and Water sources
Drops will cause a splash effect

Biomes don't change with altitude unless they're cavernous (no Savannahs in the sky)
Fixed errors with Aquifers
The Aquifer location was changed because of this
Gravel is generated below level zero
Fixed chunk shifting
Multicolored poles are generated again in Wasteland
Strange poles are not generated in Wasteland
Changed Frosty biomes transitions
Removed Lightning shadows
Snow blocks and Snow turf have the same shades of color
Copper ore no longer floats in ravines
You can get Hell Sprouts again on Crimson Nile if you use Bone meal
Copper Ore yields 2-5 Unprocessed Copper.
At Stonecutter you can get 4 units of Carved Copper from Copper Block
Fixed player's hitbox after applying Elytra
Flight on Elytra's is no longer interrupted when hitting a wall and taking damage
Ender Pearl are no longer generated as a Glow Stick in the chests of the Forest Mansion
Tropical fish reappear in Lush Caves
Returned the "Always Day" feature in world settings
Shield lock animation is now smoother

Related News:
SpongeBob and Gary Add-on
Perhaps there isn't a person who has never heard of SpongeBob. It's a
Minecraft PE 1.17.40.20 for Android
The developers have released a test version - Minecraft 1.17.40.20 on
Village And Many Biomes Near The Spawn Point Seed
Would you like to change the place of the spawn in your Minecraft
Ingen Lost Files Add-on 1.16/1.15+
Do you like dinosaurs? If so, then you will definitely like the new
Comments (0)
Commenting