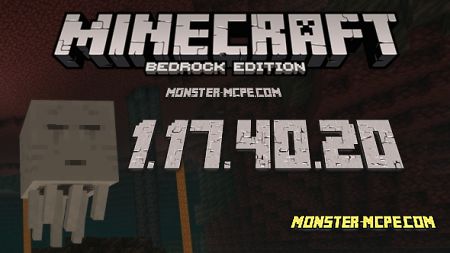 The developers have released a test version - Minecraft 1.17.40.20 on Android. The update added a new biome, made 19 changes, fixed 28 bugs and added 31 technical innovations.

New biome - Stone Peaks.
Generated on top of the mountains. It appears on the border of warm and cold biomes. For example, when moving from Jungle to Snowy Peaks.
A warm version of the Snowy and High Summits.
Covered in Rock and Gravel.

Experimental Features.
Made 15 changes. Most important:
Fixed the vegetation in Mountain Meadows
Droplet Formation is generated only in Karst Cave
Signs of the Dropper appear only in Karst Cave
Infested block is generated under the new Mountains
Clouds are now at y=192
Changed the location of biomes, river sizes, and landscape shapes
Trees in swamps grow deeper in water
Deeper shale is generated at lower levels
Fixed incorrectly colored blocks on Maps below zero level
Cave Vine not generated on the surface
Cave Liana can grow down below zero level
Fixed Villages not matching biomes
Like on the Java snapshot.
Elements of Mountain Biome
Ore distribution
Frequency of spawning of monsters in mountains and caves

Changes
Added 4 innovations. Learn more:
Beehives are generated facing north in Meincraft
Improved the creation of Maps by Cartographers
Armor no longer appears on Bandits and Rebels, but the effects remain
More mobs will be spawned in the caves of the Upper World

Fixed 28 bugs. Most interesting:
Fixed the Stalactite drop feature
Fixed a bug when eating Cake with a candle
Fixed glitches in the Character Editor
Fixed Steve's skin color in the Character Editor
Fixed the player message about changing skins
When entering @e[type=], items from the Educational Edition are not shown
Fixed a bug with player burning when teleporting to another dimension
Can't eat when hunger indicator is full
Seagrass is no longer generated under Lilies
Fixed a bug with villagers constantly opening and closing Doors
Amethyst tokens are less likely to be generated in Fortresses, so as not to break Edge portals
Improved mob movement around incomplete blocks
Mellow snow no longer shines through in the distance
Fixed the direction of the Hatch when set with a Structural Block
Fixed UI bugs

Version issues
There is an issue that the developers have already noticed: bee nests are generated too often.

Related News:
More Tools Add-on 1.16+
Has it ever happened that you have a lot of resources in your
The King of Dropper Map
Have you ever played dropper mini-games? For those who do not know,
Stardew Rock Candy Add-on 1.16.40/1.16+
Have you ever tasted candy-like Rock Candy? If not and you do not
Mountains Concept Add-on 1.16/1.15+
Do you often explore mountainous areas? If not then a new addon will
Comments (0)
Commenting