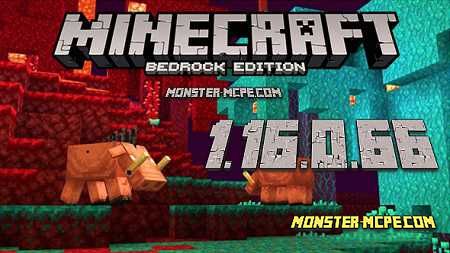 And here is the new version of Minecraft, Minecraft PE 1.16.0.66, this is the eleventh beta version of Nether Update. New Minecraft 1.16.0.66 update on Android smartphones with working Xbox Live. What awaits us in the new update is updated commands, various bug fixes, as well as improved gameplay in Nether Update!

But why is the beta version again? Most likely the full version will be available in a week. In a previous article, we already wrote that this summer there will be a release of the full version of the game. But do not be upset, because this version has many good and most importantly useful changes. You will find out exactly what changes are expected in this article below.

We draw your attention to the fact that in the new version of Minecraft Pocket Edition 1.16.0.66 there will be no global changes. This time, the developers of the Mojang studio decided to devote more time to finalizing some of the small gameplay elements.

In the new Minecraft PE 1.16.0.66 update, the main change was the optimization of the work of console commands.

Below you can find out more about these changes:

1. New parameters for the /replaceitem command, which allow more correctly replacing items from entities in the inventory;
2. Fixed a bug that concerned the refusal to delete a target from mobs. This bug more often appeared when the general cleaning command was used;
3. Improved the functionality of particles, sounds, and events, which no longer causes freezes;
4. The developers of Minecraft Pocket Edition 1.16.0.66 removed the syntax error in the /xp command during use;
5. Fixed the operation of command blocks on the map A Nightmare in Candyland, which can be downloaded on the Minecraft Market.

At the same time, the developers of Mojang studio also added a lot of small, but no less important elements to Minecraft PE 1.16.0.66. What exactly can you see below:

1. Fixed a bug related to the generation of empty chests, in which there should be a loot;
2. New attributes for shells that will allow you to better customize the disappearance of the subject;
3. Improved performance of the Minecraft Bedrock 1.16.0.66 graphics engine while riding creatures. 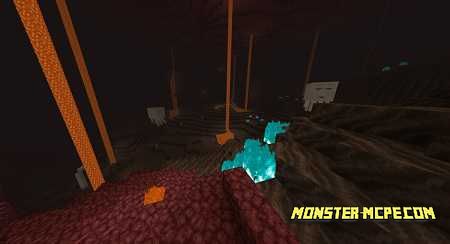 And the most important thing is the bug fixes that the developers of the Mojang studio also made for the new version of Minecraft Bedrock 1.16.0.66:

1. Fixed game crash while you launch certain worlds;
2. Crash when trying to create a game world with a set of Tropical City Resort;
3. The rest are small bugs due to which there were gameplay lags.

Related News:
Nether Update will be released in the summer
We have prepared interesting information for you about the upcoming
Minecraft PE 1.16.0.60 for Android
Have you seen the new version of Minecraft PE 1.16.0.60? If not, then
Minecraft 1.16.0.60 for Android
We present to you the new beta version of Minecraft Bedrock Edition
Smartphones Add-on 1.14+
New addon for fans of iPhone smartphones. This addon adds new
Comments (0)
Commenting