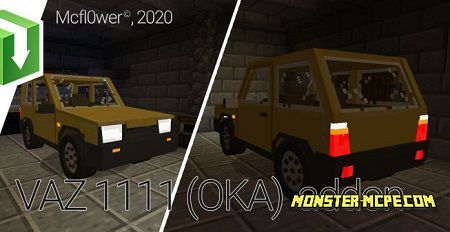 New addon for those who like small cars. The new car is called OKA, it is a car from Russia and its full name is VAZ 1111! This is a fairly small, economical and comfortable car.

This car will be added to your world in eight different colors. In addition to good textures, this car also has wheel animations. You will definitely like to travel in this car, as the OKA drives very smoothly. As already mentioned, since the car is quite small there are only two free seats.

Players can summon OKA of any color using the special command / summon, after this command write the text with the corresponding color, for example, /summon vaz: 1111_green

Related News:
Detailed Player Animations Add-on 1.16/1.15+
Would you like to improve your character model? If so, then this
Definitive Animations Texture Pack
A new functional texture pack called Definitive Animations. This is a
VAZ 2106 (Шоха) Addon 1.14+
Have you ever seen a car like the VAZ 2106 on the street? This is a
Download Minecraft Java 1.14
Everyone is looking forward to a new update for everyone's favorite
Comments (0)
Commenting