Crafting Dead PE Addon creates in the world of Minecraft PE some elements that you most likely could see in the series The Walking Dead. The main idea of the television show is that people tried to survive after the zombie apocalypse. A couple features can now appear in your game, including cool weapons!

You can choose any type of new weapon in Minecraft PE, it can be Baseball Bat, strong Crowbar, Fire Ax or Sword of Samurais. You can see that each type of weapon has an excellent texture, similar to the original in the series. 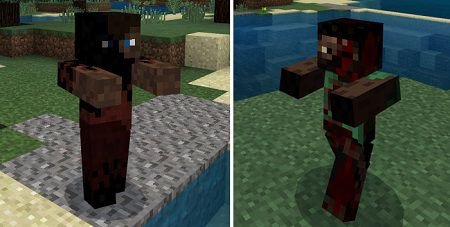 Related News:
Download Minecraft PE 2.0.0 apk free
A lot of players of PC, X-Box, PlayStation, and of course of mobile
Sand Runner Map (Parkour) (Minigame)
The idea of creation this map was taken from Gravity runner, it is
Zombie Apocalypse Addon
Map for those who likes games in survival type, especially for those
Fortnite Addon
Fortnite Addon is a cool add-on that allows you to create a new
Comments (0)
Commenting