Would you like to go on a new adventure and explore new places, namely in outer space? If yes and you like space and everything connected with it, then the new add-on is what you need. The new add-on is called Astrocraft. This add-on adds open space to your Minecraft world, but we draw your attention to the fact that at the moment only one rocket and one planet are available to players. In the future, other planets and types of rockets will be added to the game.

In addition to the rocket and the planet, you will also see and be able to use new items of armor, as well as other tools that are necessary to use your space rocket. Let's take a look at all the features of this add-on below.

As mentioned earlier, this add-on adds open space to your Minecraft world, as well as a space rocket, a planet, and other items that will be useful for you to survive and travel through space. More content will be added in the future.

The first thing you need to travel safely through space is, of course, a spacesuit. The spacesuit is a special suit for astronauts that allows them to survive and breathe in outer space, a kind of armor.

In order for the player to be able to use a spacesuit and be protected in open space, you must first craft it. In the screenshots below you can see the sequence of what needs to be crafted and how to do it. 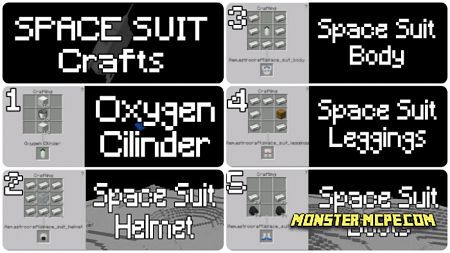 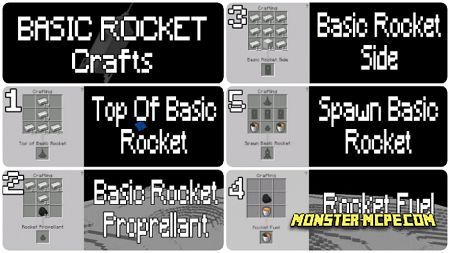 After the player has crafted a rocket, you need to board your space rocket and go to the moon. Thanks to the speed of a space rocket, you will reach the moon in just a few seconds.

As for the Moon, at the moment it is the only planet available for players to explore. On this planet, players can find blocks of iron and large holes that resemble small parts of caves.

We draw your attention to the fact that the gravity on the Moon is not at all the same as on Earth, therefore, be careful when moving on the surface of the Moon, as through carelessness you can accidentally jump out of its limits. All jumps and landings on the lunar surface can be slightly smooth and slow.

Related News:
More Tools Add-on 1.16+
Has it ever happened that you have a lot of resources in your
Golden Utilities: Transport Any Mob and Much More Add-on
Have you ever faced the problem of transporting mobs or maybe you
Cave Enhancements Add-on 1.16+
We present to your attention a large and fairly voluminous Cave
SpaceX Falcon 9 Rockets Add-on 1.16/1.15+
Have you witnessed such a historic event as the launch of the SpaceX
Comments (0)
Commenting