How often do you spend your time in dimension The End? If often, would you like to complicate it a bit by adding new challenges? If yes, and you like different difficulties, then the new add-on is exactly what you need, as it adds new mechanics to the world of Minecraft for reproducing such hostile creatures as Shulkers. This add-on can be useful for those players who want to farm more shells from shulkers. On the one hand, it complicates your survival, on the other hand, it gives you the farm of the necessary resources to craft a shulker box. Let's take a look at the features of this add-on below.

As mentioned earlier, the new add-on adds a new mechanic for reproducing such hostile creatures as Shulkers to the Minecraft world. Previously, such a mechanic could be found in the Java version of the Minecraft game, now this mechanic is available to players for the mobile version of the game. With an increased chance of spawning shulkers, namely 3/4, if the player shoots at a shulker using shulker bullets. 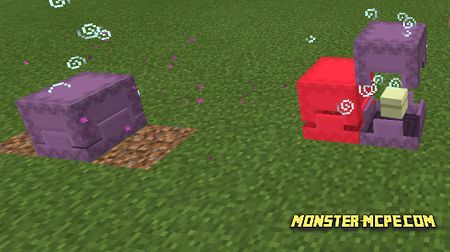 The main conditions for increased reproduction of shulkers are as follows:

Only after the above conditions are fulfilled, another shulker will spawn at the place of the teleportation of the shulker after death!

Related News:
More Tools Add-on 1.16+
Has it ever happened that you have a lot of resources in your
Color Coded Shulker Box GUI Resource Pack
Do you like different colors or do you want to change something in
Redstone Mechanic Evolution 1.14/1.13+
A new add-on that adds new creatures to the game. This add-on, unlike
Redstone Mechanic Addon
Increase your playing skills and get a great experience in game,
Comments (0)
Commenting