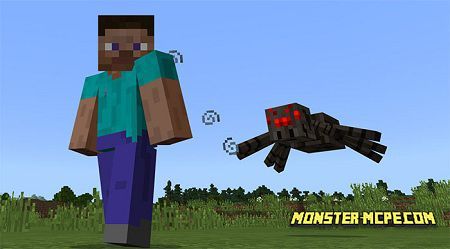 New addon available for download for those who likes difficulties in game. Spiders will not attack you until you not start attack them, that is why here, you will get a new difficulty at nighttime. Spiders will attack you automatically, they got a new ability as shooting webs like spiderman.

Related News:
Magent And Pagent Add-on (1.8+ Only)
This addon adds a new creature to Minecraft, which are Pagent and
Download Minecraft PE 2.0.0 apk free
A lot of players of PC, X-Box, PlayStation, and of course of mobile
Redstone Mechanic Addon
Increase your playing skills and get a great experience in game,
Spiderman's Webshooters Addon
Spiderman's Webshooters Addon is your opportunity to add 2 items to
Comments (0)
Commenting