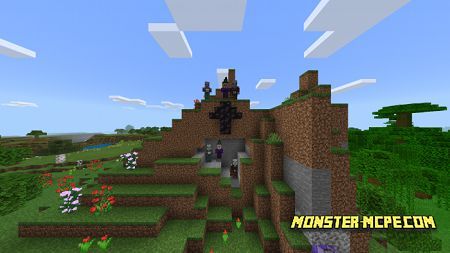 Have you ever faced such a bug when illagers spawn in caves or somewhere underground? If so, then a new addon will solve this problem. A new addon was created so that players would fix such an annoying bug as the spawn of illagers in the wrong places. A large number of players complain that a bug occurs due to which entire groups of illagers can spawn in caves or somewhere underground, which is not at all convenient, which is why the new addon is able to fix this annoying bug.

The new addon teleports all illagers to the highest points of your world, in other words, illagers will spawn on the highest blocks in the Minecraft world, thereby saving players from such an annoying bug.

Attention: Please note that this bug can cause lags on devices with low performance, as well as during raids! No experimental game mode required. Compatible with other addons!

Related News:
The Clone Wars Add-on 1.16+
Would you like to add new caves to your Minecraft world that the
Cave Enhancements Add-on 1.16+
We present to your attention a large and fairly voluminous Cave
Minecraft for Weak Android phones
We are sure that a fairly large number of players today are faced
Download Minecraft 1.11.0 for Android (Release)
Minecraft Pocket Edition 1.11.0 — an update of the mobile version of
Comments (0)
Commenting