Have you ever played the game God of War? If you have played this game and are a fan of it then this new addon is what you need. For those who have not played this game, we highly recommend it. This is a third-person action-adventure game based on Greek mythology set in the territory of Ancient Greece. A hack and slash game that focuses on eliminating a large number of enemies with various combo attacks.

In addition, the player will need to solve puzzles, and there are platforming elements in the game. God of War is one of the best-selling games for the PlayStation 2 with 4.6 million copies sold. It has received several awards as Game of the Year and is considered one of the best action-adventure games. In addition to the gameplay, the game was rated for its graphics, soundtrack, and storyline.

The new addon adds to your Minecraft world all the famous characters and weapons from the game God of War from the first to the fourth chapter. Here you can play a role and choose your own adventure storyline. Become a hero who has to defeat all the gods of both Asgard and Olympus!

Explore the Minecraft world in a new way, use new unique weapons, and embark on a new exciting and dangerous adventure. We also draw your attention to the fact that players can play the role of a Spartan, the famous and main character of this game. The new addon also adds the son of a Spartan named Atreus. Let's take a closer look at the features of this addon.

1. The first type of weapon is the weapon used by the Spartan, namely the blades linked by a chain, the Blades of Chaos. The Spartan received these blades from the god of war, namely from Ares. Please note that it will be quite difficult to craft this weapon, but it is worth it and is one of the most powerful in the game.

2. The second weapon is one more blade which is called Blades of exile. This weapon looks very unique and unusual, as well as powerful.

3. The next type of blade is called Blades of destiny. Convenient to use but weaker than the previous ones.

4. Another unique blade called Judgment. This weapon is quite difficult to craft, but you should definitely try it. Please note that outwardly it is very similar to the original blade from the game God of War. The only difference between the blades is that there is no Themis figurine at the hilt of the blade.

5. The most powerful weapon in the game, the weapon of the God Zeus, the blade with which you can easily kill the gods, is called Olympus.

6. A weapon that can help players fight in the dark is the blade of Artemis. A powerful purple blade.

7. A weapon that players can craft or get after killing Hades, this drop is a weapon called the Claws of Hades.

8. What addon could be complete without a trident, especially when it comes to Greek mythology. Here the players will be available, as you might have guessed, Poseidon's trident. A very useful weapon for battles in water and underwater, as with it you can breathe underwater and gives strength.

9. Unique metal gauntlets with a lion's head on the end called Nemean Cestus. A powerful weapon with an unusual design.

Items that players need to use to craft certain types of weapons:

1. The first is Zeus' lightning bolt. This is a throwing weapon that Zeus uses for battles. This item can be used to blow up your enemy. Players can craft this item or get it by killing Zeus.

2. The second is a food item called Respect for Daddy. Use this item so that the son of the Spartan Atreus would follow you during your adventures. This mob will help you in battles with other hostile mobs.

Now let's look at the new mobs, namely the Gods, which will be added to the Minecraft world.

1. The first god and perhaps the most important on Olympus, the Boss named Zeus. A very strong mob. Lightning drops. 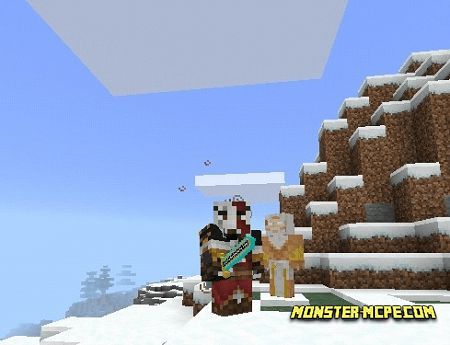 2. The second god is the brother of Zeus named Hades. This is the god of the underworld. Very strong and drops the Claws of Hades. 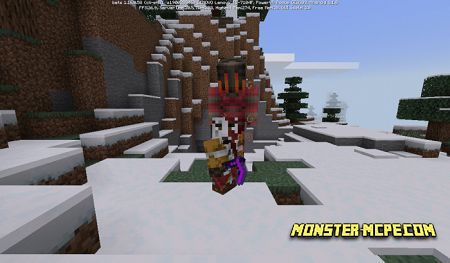 3. Another brother of Zeus, this is the god of the seas, Poseidon! This god is strong both in water and on land. 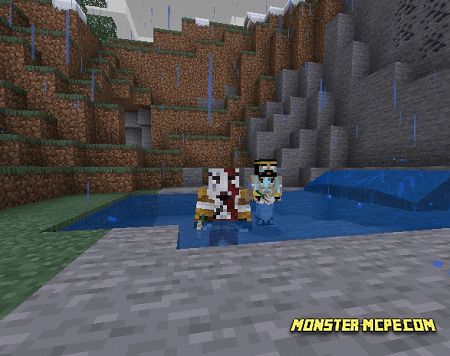 A screenshot of this mob is below: 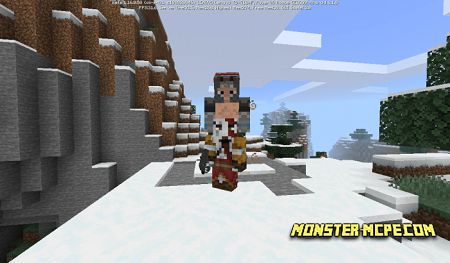 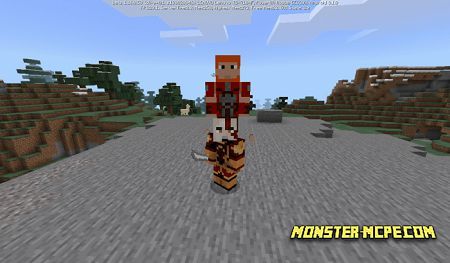 6. The aforementioned son of a Spartan named Atreus. Use Respect Daddy to tame him.

Screenshot of the son of a Spartan: 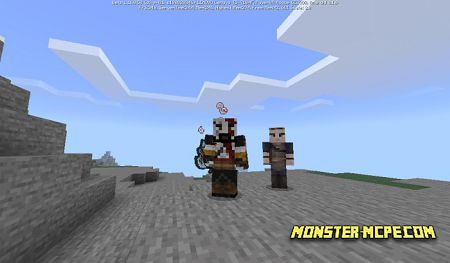 7. And the last character is Baldur, or as he is also called Baldr (Balder), the son of Odin. This god is the second most powerful boss in the Minecraft world, after Zeus.
Facebook
Twitter
Pinterest
God of War Add-on 1.16+
god-of-war-in-minecraft-addon.mcaddon
Download free[278.92 Kb]

Related News:
Half Life 1 Map – Anomalous Materials Chapter
Have you ever played the Half-Live game? If yes and you are a fan of
Cave Enhancements Add-on 1.16+
We present to your attention a large and fairly voluminous Cave
Pixel Gun Melee Weapons Add-on 1.16/1.15+
Have you ever played the Pixel Gun game? For those who do not know
Minecraft : Call of Duty (Chapter 1) Map
This game is designed for those who like real action games, this is
Comments (0)
Commenting