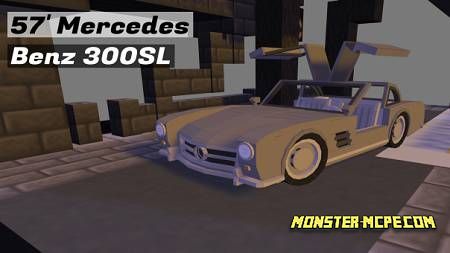 Do you like Mercedes cars? Mercedes is a very well-known manufacturer of premium cars, trucks, buses, and other vehicles, which is part of the German concern Daimler AG. If you like the cars of this company and you are a fan of them it then the new addon is exactly what you need. The new addon adds another car to the Minecraft world, but very unusual since it was created back in 1955 (according to some sources, in 1957). Yes, we are talking about the first sports car of the West German brand Mercedes-Benz of the post-war period, namely the Mercedes-Benz 300SL!

Many connoisseurs of Mercedes call this car Vintage Beauty, and for good reason because the unique body design and door opening features only confirm this name. We also want to note that this car was rightfully considered the fastest car of the 1950s. Doubt? It’s in vain because in those years this car could reach speeds up to 263 km / h! This is a very high-speed indicator for that time. Also, this car was very different from other cars of that time, not only in maximum speed but also in body design and other technical features of the car.

This car has not been produced since 1963, but it has not lost its value, since a total of 1400 cars were produced and bought by people from all over the world. Now this car can cost up to two million dollars! Yes, this is a huge amount of money, which is why we present an addon where you can get this car absolutely for free and feel the power of the 1950s! Let's take a look at the features of the Mercedes-Benz 300SL below.

This sports car has two seats for you and your friend. As mentioned earlier, it is very fast. Added slots for storing items. Also, added sounds and animations. As for the animation, along with this car, an animation was added for the unique opening of the door for this Mercedes model, namely upwards, in other words, like the Tesla X car! Below is the screenshot you can see how it will work in the Minecraft world.

In order for the player to be able to use a new vintage car, it is necessary to use one of two methods, namely the first one is the spawn egg which is in the creative inventory, or uses a special /summon command.

Below you can see in what colors this vehicle is available and the commands for spawning.

In general, this vehicle is available in three colors:

1. Standard Silver color, spawn command: 300sl: silver. Below is a screenshot of what this car looks like: 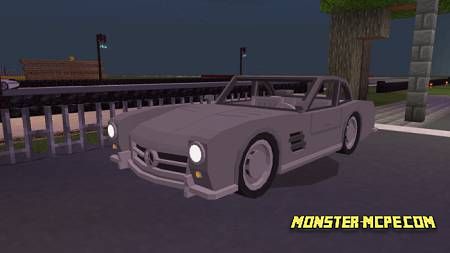 2. Unusual Gray-Blue color, spawn command: 300sl: cyan. Below is a screenshot of what this car looks like: 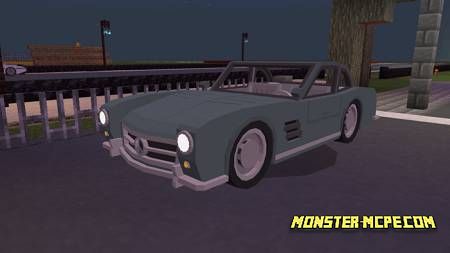 3. Simple Black color, spawn command: 300sl: black. Below is a screenshot of what this car looks like: 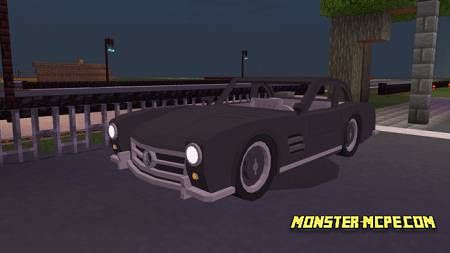 Below you can also see other screenshots of how this car looks from different angles: 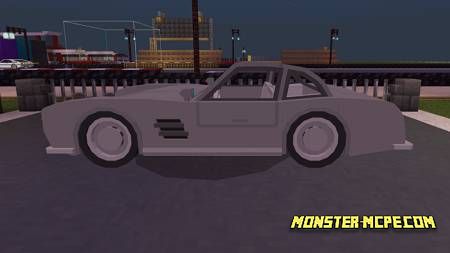 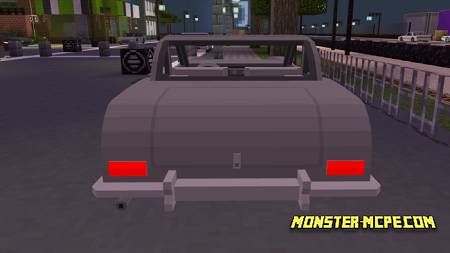 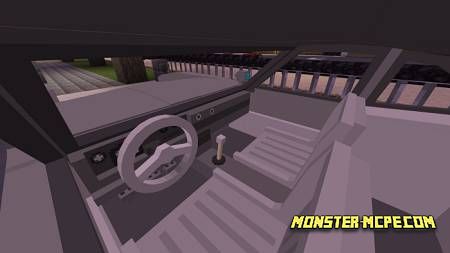 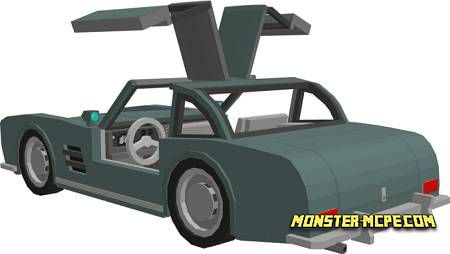 Related News:
Morningstar War Add-on – 3D Guns
Would you like to add real military equipment of the 2000s to your
PUBG Vehicles Add-on 1.16/1.15+
Have you played a fairly popular game today, PUBG, or, as it is also
Motorsports & Rally Vehicles Add-on 1.16/1.15+
Do you like racing cars? Would you like to add eight new types of
Vanilla Vehicles Addon 1.6+
This new addon adds new vehicles for MCPE, here is 11 types of a
Comments (0)
Commenting