Very soon we will be celebrating the big Halloween, or as it is also called All Saints' Eve. This is the day when people decorate their houses and children wear different scary costumes. Therefore, for you, we have prepared another addon that adds some elements of Halloween. The new addon adds a real magic broom, a mob, and some magical items such as a pumpkin bomb, a broom, spells, and witches to the Minecraft world.

Below you can see what the magic broom will look like in the Minecraft world:

Also, the crafting recipe for this magic broom:

In order for the player to be able to tame the magic broom, you need to use a special spellbook called Curse of Obedience, and also use a special levitation charm!

In order for players to use additional enchantments, they must first be crafted, below you can see crafting recipes for the spellbook and levitation. 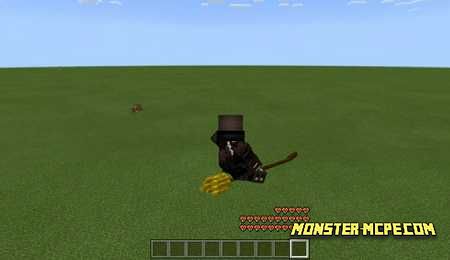 In order for the player to be able to craft a spellbook, you will need material such as bone and a written book:

In order for the player to craft a levitation spell, the player will need a book and such material as the Phantom Membrane:

Earlier it was said that such an item as the Pumpkin Bomb will also be added to the game. This is a new type of bomb that the player can only get by killing the witch. Please note that players cannot craft such an item. Also, note that this is a throwable item. Below you can see how the bomb will look in the Minecraft world: 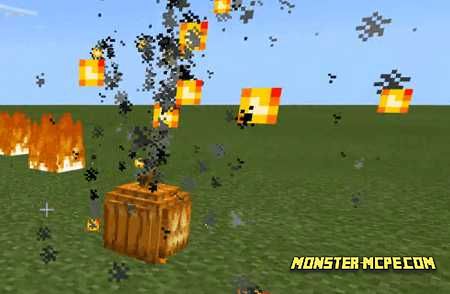 The new type of witches spawns just like ordinary ones, and after death, they drop a broomstick and bombs. You can see what these mobs look like below: 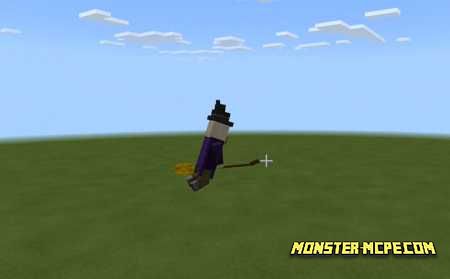 Related News:
Caps and Hats Add-on 1.16/1.15+
Would you like to add a new accessory to your character? If so, then
World Animals Add-on 1.16/1.15+
Would you like to add more different animals to the Minecraft world?
MoSwords Craft Addon 1.14+
We present to your attention a huge addon that adds a large number of
Twelve Eve (Horror) (Adventure)
Horror map for those who like maps of this type and scary atmosphere,
Comments (0)
Commenting