Would you like to see the damage that is given to players opposite you? If so, then a new cool addon is what you need. The new addon allows players to see the health of players when someone deals damage to them. This is a very interesting and useful addon, it allows you to see how much health the other player has left. The new addon is called Health Bar. This addon also adds a heart that will be displayed under the player’s nickname, as well as the number of hearts that the player has left.

By default, in the game, you will see only twenty hearts. Below you can see an example of what the health bar looks like: 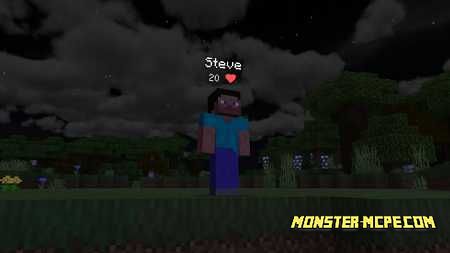 Please note that the health bar will appear then you will be damaged. As soon as you spawn in the world it will not be displayed.

Related News:
Territory Of Heart Add-on 1.15/1.14+
A new exciting addon for those players who are tired of boring mobs
Monster Hunter (Bedrock) Addon 1.15+
We present to you a very interesting addon that adds new creatures to
Lost Weapons Add-on 1.14+
Are you tired of the monotonous and uninteresting weapon in the
MoSwords Craft Addon 1.14+
We present to your attention a huge addon that adds a large number of
Comments (0)
Commenting