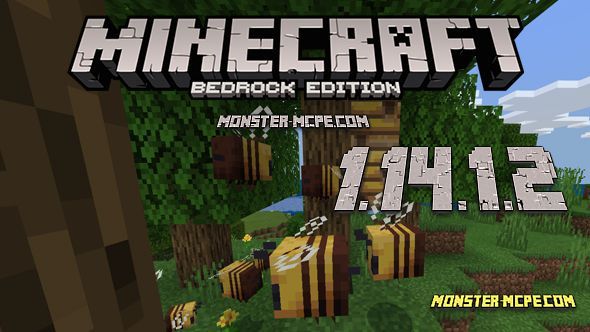 And here again a new update. This time, the developers introduced the players a new update to Minecraft Bedrock Edition 1.14.1.2. This version is already available for Android devices, and also supports Xbox Live. Play with new changes and updated bees.

This version of Minecraft Bedrock was released for the same purpose as everything before, namely, to fix bugs and errors that players found during the game. We draw your attention to the fact that this version of Minecraft is most likely the pre-release version of Minecraft BE 1.14! Previously, the developers of the Mojang studio already wrote about the release date of the new version, but recently they changed the date and moved this event 1 day later, namely on December 11! The new version 1.14 opened for all players of the Minecraft world such amazing mobs like bees, honey and much more, after which this update was called the Honey update!

Honey update added the first insects to the Minecraft world, these are bees. These cute mobs live in green biomes, wherever there are flowers, where they live in the hives and make honey.

Interesting: The behavior of bees is fully consistent with their natural behavior in real life! This confirms the bee sting in the game, after which these insects die.

In the latest updates, the developers worked very well for their behavior, they became smarter and have a clear daily routine. These insects follow their daily routine, and also know how to behave in certain situations, both in the rain and when someone is trying to attack these insects. For example, during the rain, they hide in their hives or nests. 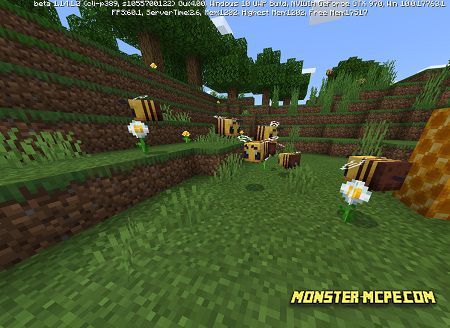 Also in the new update honey was added, which players can easily extract from hives using bottles.
In order for the player to get honey, he should press the bottle along the hive.

After that, players can use bottled honey to craft honey blocks. 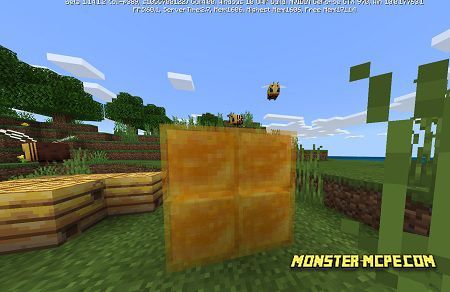 The main feature of honey blocks is that standing on these blocks, the player or the mob loses its ability to jump and its movement speed decreases. Jumping can only be done using a special potion.

Honeycomb is another item that has been added to the game. The player can get them using scissors. How? All you need to do is just click on the hive with them. This item is needed so that players can craft honeycomb blocks in the future.

These blocks can only be crafted for decorative purposes, that is, as you already understood, a decorative block in the game.
Hive 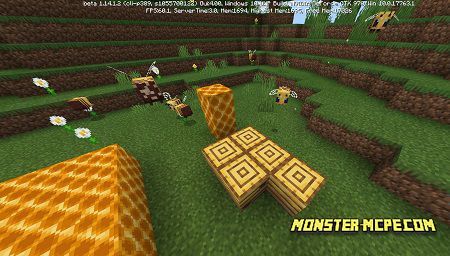 What it is? For those who don’t know, this is the house of the bees. This is the place that they use for life, namely to sleep or hide from bad weather.

The first is a wild hive/nest that spawns naturally in Minecraft in random places like forests, fields, and so on. If the player wants to get honey, the bees will attack him;

The second is the home hive. In this case, the bees will not attack the player who tries to get honey. Create your beautiful apiary!

— Bees can die again after stinging the player;
— Fixed a bug with the player’s empty hands;
— Improved performance Minecraft 1.14.1.2 when downloading skins to the server.