Everybody waiting for new updating which is called Village and Pillage, it was represented on Minecon conference, where was showed a lot of exciting and interesting things. Updating adds new types of villagers and villages.

One of the most important updates, because villager is only one creature which is interacting with player. Well-known fact that their role is to cooperate with you by trading. For now, it is one of the most expected updates for MCBE 1.8. 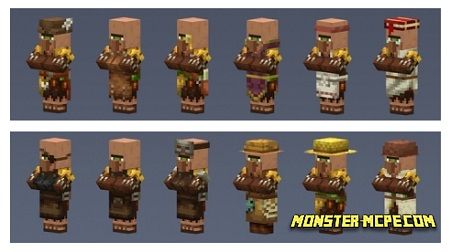 In update Village and Pillage, you may see a modified building with absolutely another structure, many various interesting things and the main is a new type of villager.

Supposedly all villages will be populated with a big amount of villagers, where each of them will have his own job and will cooperate with player.

What is Pillage in title of update? It means that it will be added another creatures, not just a villager. They will be able to rob the villages, destroy them and the main their difference and advantage is that they can tame animals which is makes them stronger. 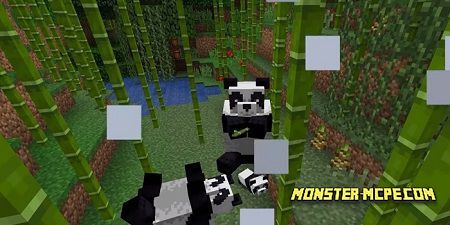 These creatures no need anymore any bow or crossbow as weapon, they will have more dangerous weapon, which will cause more damage. It will appear in Minecraft PE 1.8. Additional information will be available in the nearest time.

The most popular animal in new update is pandas, they are living in jungle biomes. It is pretty cute animals, neutral for player and prefer to eat bamboo. As you can see, update MCPE 1.8 is brings an additional materials for building of different areas and buildings.

The most important thing is that addons will become similar to modifications for MCBE, which is means that Mojang makes a really important step in innovations.

1. New types of villagers
2. Pandas and other mobs
3. Crossbow
4. Improved add-ons
5. Marauders and their mobs
6. Pillages

The date of release

Related News:
Minecraft Bedrock 1.8.0.10 apk free
Almost every player of Minecraft, already heard about new coming
Magent And Pagent Add-on (1.8+ Only)
This addon adds a new creature to Minecraft, which are Pagent and
Minecon 2018 and Minecraft Bedrock 1.8 - What will it be?
Minecon is the conference which was held on September 29 of this
Download Minecraft PE 2.0.0 apk free
A lot of players of PC, X-Box, PlayStation, and of course of mobile
Comments (0)
Commenting