Almost every player of Minecraft, already heard about new coming update which was represented at the Minecon. There are a lot of interesting news and updates which we already can see in beta versions and others sources. Update is called as Village and Pillage, in general, directly concerns villagers and villages.

Perhaps only the one type of mobs which is interacting with players. New types of villagers (with no any additional functions, except of trading).

In update Village and Pillage, you will see new types of villagers, the list of those, you can see below, also improved structure of their houses, instead of their usual square house.

Perhaps, in the coming update, each type of villager will have his own job and aim, and also, villages will be very populated with villagers.

Of course everybody paid attention to the word from title of update — Pillage, it is new type of creatures, the main aim of those, is to destroy and rob villages and villagers. Their additional plus, is that they have tamed animals, what makes them stronger and danger!

Their new weapon is crossbow, which will appear in Minecraft PE 1.8. It is pretty danger weapon, which cause bigger damage.

As it was mentioned before, in this update we will see new and very cute animal, such as panda, but except them, there will be other animals in jungle. This beautiful animals is not dangerous for player, they are neutral. Also, new update will bring us a new type of building plants and blocks, in jungle style. 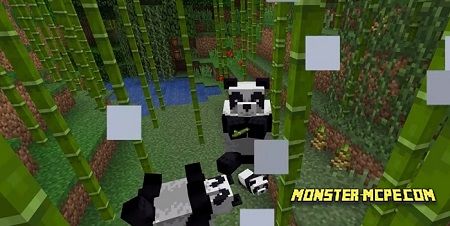 In few words, with this update, addons was greatly improved, which is brings us new modifications for MCBE.

Related News:
Magent And Pagent Add-on (1.8+ Only)
This addon adds a new creature to Minecraft, which are Pagent and
Minecraft Bedrock 1.8.0.8 apk free
Have you been waiting for a new update Village and Pillage? Here it
The Village & Pillage Update Map
New coming update for MCPE, which is updating and add a new biomes
Minecraft Bedrock 1.8 apk free
Everybody waiting for new updating which is called Village and
Comments (0)
Commenting