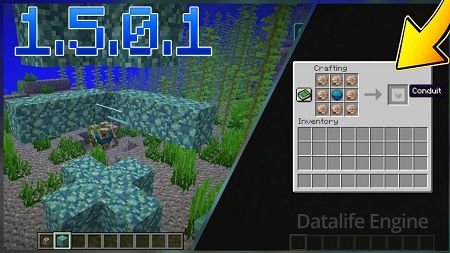 Developers release the next update Minecraft 1.5.0.1, where you can observe some changes and many bugs fixed. The gameplay becomes more comfortable thanks to new features of MCPE and stability of the gameplay! You can download Minecraft PE 1.5 by following the link at the end of the description. So, let's talk about the main novelties in this release!

To make Kraft Conduit, use the recipe: 8 nautilus shells and 1 heart of the sea.To activate the Conduit, you need 16 blocks of prismarine, the conductor must surround the water from all sides.You can replace the prismarine with a marine brick or sea lantern.

When you activate Conduit, the character appears underwater breathing while swimming, vision improves, the speed of resources extraction in the pond is higher!

A new water effect will operate within a radius of 16 blocks - on each of the 7 blocks that create the frame. Activation occurs when there are at least 16 blocks of prismarine in the frame.

To fully activate the Conduit, you need 42 blocks, then the player will have another opportunity - to attack enemy creatures within a radius of 8 blocks, for every 2 seconds the mob will take away the heart of health.

You can use different constructions to activate a new effect.

Remember that the Conduit block must be in the center of the structure, after which the activation is automatic.

Download Minecraft PE 1.5.0.1 for free you can follow the link. Install an update and create underwater bases with effects right now!