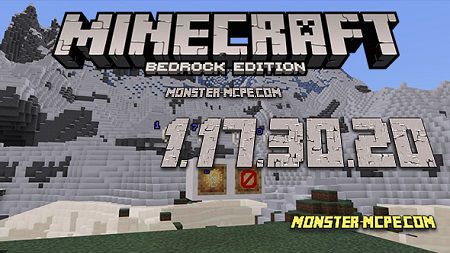 We know you were waiting for this, you were definitely waiting for a new update that, for some unknown reason, Mojang did not present last week, and now it's time for a new update that the developers of the Mojang studio released today. We present to your attention a new test update, namely Minecraft PE 1.17.30.20, and as usual for all Android devices and devices that use the Android operating system.

In total, 25 found bugs were fixed in the new update, as well as 2 changes to the gameplay and 16 changes that relate to the technical aspects of the game. Let's take a look at all the features of the new test version of the game below.

As mentioned earlier, 25 found bugs were fixed in the new update, as well as 2 changes to the gameplay and 16 changes that relate to the technical aspects of the game.

The first thing we will consider with you is the work on parity with the PC version of the Minecraft Java game.

The Mojang developers continue to improve the bedrock version. Eating the Fruit of Horus while flying no longer deals fall damage. Also, the Skeletons now hold the bow with both hands.

Now the most important thing is the bug fixes.

As mentioned earlier, 25 different bugs have been fixed in the game. Below you can see the most significant fixes in our opinion.

1. Fixed general crashes during the game;
2. Fixed crashes when downloading maps from the Marketplace;
3. Now speech synthesis correctly reads the text in the inventory and chat;
4. When holding the light block in your hand, it will be visible and also show the lighting level;
5. Fixed removal and adjustment of Light blocks;
6. Fixed the hitbox of the Light block;
7. Fixed the destruction of the Barrier block without holding the block itself;
8. After the boat spawns, they do not remain in the inventory;
9. Fixed bugs in the user interface;
10. Fixed display of mobs in the Structural block menu;
11. The Wither can spawn at negative altitudes (note that this is an experimental feature);
12. Ghasts do not spawn in areas smaller than 5x4x5 blocks;
13. Magma cubes are not generated in areas less than 3x3x2 blocks;
14. Increased the hitbox of Magma Cubes;
15. Fixed the font of the Glowing text on the Plates;
16. Fixed a bug related to blocks in the water;
17. Fixed a bug related to Pumpkins when trading with Villagers;
18. Now you can not add more Candles if there is no supporting block;
19. The sky is not drawn through the ceiling of a large space when fog is activated.

And the last one is the changes that relate to the technical aspects of the Minecraft PE 1.17.30.20. In general, the Mojang developers have added 16 technical changes for the development of add-ons and testing the gameplay of the Minecraft world.