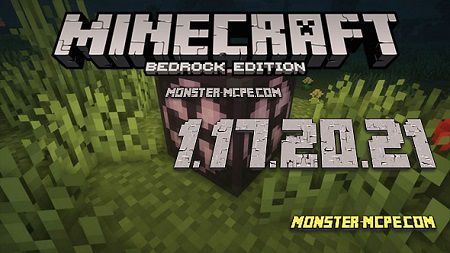 The new week for many players is not just a week and days of the week, but also the expectation of a new update for Minecraft PE. That is why today we present you with a new update for MCPE 1.17.20.21. The new test version was released by the developers of the Mojang studio. A new test version of Minecraft PE 1.17.20.21 is available now for all the users of operating systems of Android and for all the users of Android devices.

In general, this update is very small and has a small number of changes, but they are still there and they are significant enough for the game. In this update, the developers have fixed only four bugs and added a new mode called Angular Mode for the Structure Block. Let's take a look below at all those features that will be added to your world with the new update.

As mentioned earlier, in the new update, the developers have fixed only four bugs and added a new mode called Angular Mode for Structure Block. This mode is used when designating an area for saving, together with the Find button in save mode. Please note that only corner blocks are recognized that have the same name as the saved structure.

Now let's take a look at the bug fixes.

In general, only four bugs were fixed, below you can see a list of those bugs that were fixed by the developers of the Mojang studio:

1. A crash has been fixed in which a structure is placed in an unloaded area using commands and then removed;
2. The text of the marks on the Maps was corrected when Ray Tracing (RTX) was activated;
3. Compass and clock can no longer show time and direction in the Book of recipe;
4. Such mobs as tamed wolves from now on appear correctly in the Structure Block menu.

The developers of the Mojang studio have added nine technical changes for players who create add-ons and for those who are testing certain features of the Minecraft world.