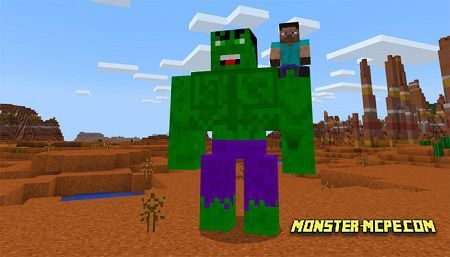 New add-on which is adds new mobs in MCPE world, which is called The Hulk Add-on. The first one, is strongest and famous character in the world is Hulk! Superhero has amazing strength and pretty good resistance to damage. Another one, is Hulk-buster. Pretty exciting to watch how they fight each other. Player able to control each of them.

How to spawn Hulk?

Below player may see visual example that what he should use. The structure which is consists of 4 iron blocks and 1 pumpkin. Put pumpkin on blocks, and it should look like a head.

In general, neutral for player, can hit player only if he will force it. Rideable, it means that it can be mounted. The main his aim is to kill all enemies, such as hostile mobs. 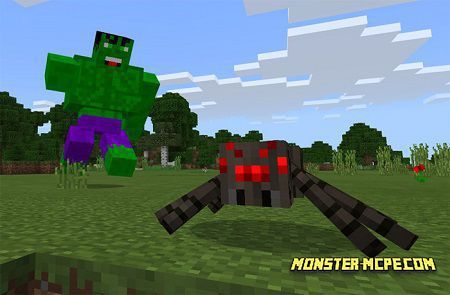 Such mobs as spider, zombie and others enemy mobs will be attacked by Hulk.
Neutral.
How to spawn Hulk-Buster?

As it was mentioned before, Hulk is one of the most the strongest mobs, but there is only one, who can have equally strength, it is Hulk-Buster. You can see examples of how this mob look below, and as you can see he looks like Iron-man. Each player can ride him, fly or fight with other mobs.

This mob was created specially for battles with Hulk. Do not forget to use activation commands, it is very important. Recommended to watch from distance how they will fight.

Related News:
More Tools Add-on 1.18
Has it ever happened that you have a lot of resources in your
Tools and Armor Add-on 1.17+
You can never have too much armor and tools.
SpongeBob and Gary Add-on
Perhaps there isn't a person who has never heard of SpongeBob. It's a
World Animals Add-on 1.18+
Would you like to add more different animals to the Minecraft world?
Comments (0)
Commenting