What do the four simple but very popular letters, TMNT, mean to you? That's right, this is Teenage Mutant Ninja Turtles! That is why today we present you a new add-on that adds a team of four mutant ninja turtles to your Minecraft world. For those who don't know who they are, these are fictional superheroes, the protagonists of many games in the Teenage Mutant Ninja Turtles series of games, as well as films and cartoons. These superheroes have been trained in ninjutsu all their lives using their strength and skills against villains.

All four turtles have certain types of weapons and certain skills. Now, these famous superheroes will be part of your Minecraft world. Let's take a look at the features of the new add-on below.

As mentioned earlier, the new add-on adds famous TMNT superheroes to the Minecraft world, namely Donatello, Raphael, Michelangelo, and Leonardo. At the moment, these are the first heroes of this add-on, but in the near future, others will also be added, namely the villains and enemies of the turtles.

In addition to turtles, the most favorite food of ninja turtles, namely Pizza, will also be added to the world of Minecraft! We also draw your attention to the fact that players can use this item of food in order to heal the turtles if they received damage during the battle.
In order for you to get a pizza, you need to craft it, for this use a biscuit and bread.

Below you can see the recipe for making pizza:

Please note that all main characters of TMNT have the same health, can deal the same damage, and have the same movement speed. The only thing that sets them apart is their appearance, weapon types, and attack animations.

Below you can see what four superheroes look like in the Minecraft world: 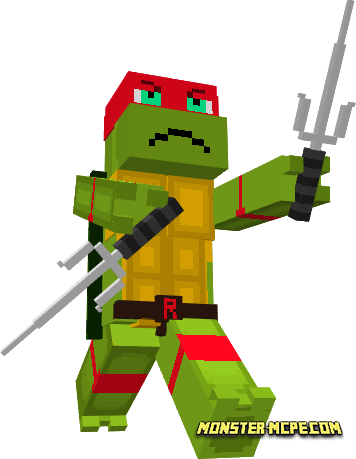 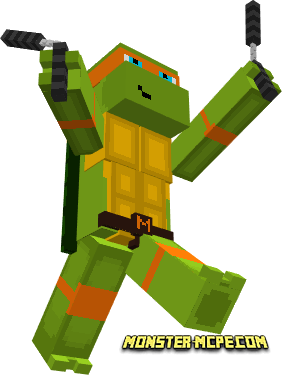 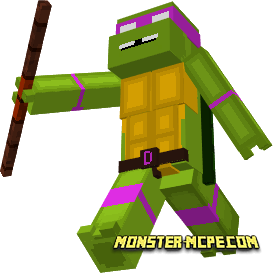 Related News:
Nickelodeon Add-on 1.16+
This is perhaps one of the first add-ons that add characters from the
Cave Enhancements Add-on 1.16+
We present to your attention a large and fairly voluminous Cave
Block letters Add-on 1.16/1.15+
We present you with a new addon called Block letters. As you might
Marvel Superheroes Addon
New interesting mod which is adds Marvel heroes and villains, are
Comments (0)
Commenting