Would you like to add more fantastic creatures and new items to your Minecraft world? If yes, and you are the one who loves to learn something new and interesting, then this addon is what you need. Famous fantastic creatures will be added to your world that will add more danger and exciting battles to your world, some of them will be neutral, and some will be very dangerous and hostile. Let's take a look at the features of this addon below.

Features of the addon and new creatures

The first creature is the Minotaur. This creature will be neutral in the Minecraft world, but if the player is the first to attack the minotaur, he will defend himself and will attack you. Has 150 health points and can deal 12 damage to its target. These creatures live only in the savanna biome. Also, a feature of the minotaur is the ability to exchange items.

This is a very important mob because when interacting with it, players can get useful items for survival. Below you can see a screenshot of what the new creature looks like and the items you can trade with it: 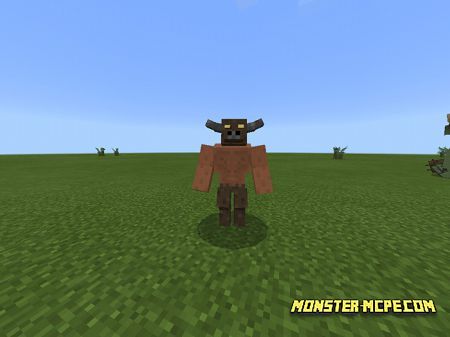 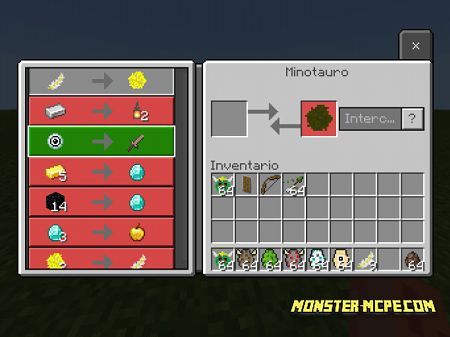 The next creature is Cyclops. This is a kind of new type of boss. They are very strong and very hostile. This boss has 300 health points and can deal 12 damage to its target. After death, it drops a useful item, namely the eye, which players can later use to craft a new sword. 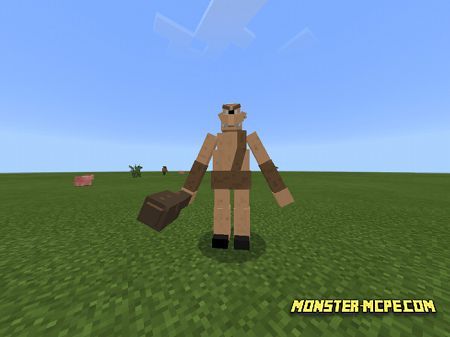 Also, players will be able to ride such a fantastic creature like Pegasus, but for this, players first need to craft a special saddle for the Pegasus. Players can use this saddle to ride two different types of pegasus.

Below you can see the crafting recipe: 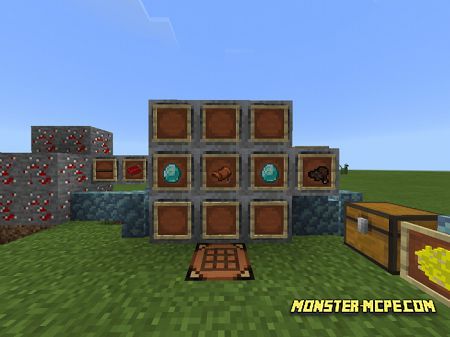 The first type of Pegasus spawns anywhere in the Minecraft world. They are neither hostile nor dangerous. These creatures are peaceful and can be saddled by players. In order for the player to fly up with the pegasus, it is necessary to use a saddle and use it on the pegasus. After you have saddled the pegasus you can fly.

The control principle is very simple, look up and you will take off, but if you look down it will land on the ground. These creatures have a small number of health points, namely from 30 to 40. Pegasus eats either a golden carrot or a golden apple.

Below you can see what the first type of pegasus looks like: 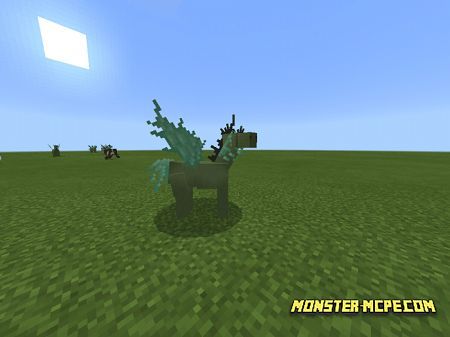 The second type of pegasus is very rare and it is very lucky to find it. This is a truly special mob that spawns only in icy mountains. They are so rare that only one such creature can spawn in one such biome. Please note that these creatures have two free slots for your items. The control principle is very simple, look up and you will take off, but if you look down it will land on the ground.

Eats a pegasus or a golden carrot or a golden apple that can be exchanged with the minotaur. This creature has 50 health points. Below you can see what the second type of pegasus looks like: 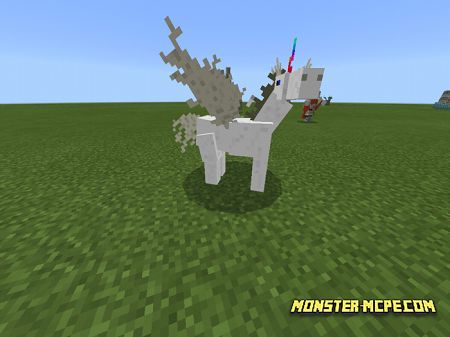 In addition to the above creatures, a whole group of dangerous creatures will also be added to the Minecraft world, namely the Vikings. These mobs are very dangerous and hostile towards all living things.

Among the Vikings, large and strong ogres can spawn. Please note that Vikings do not spawn naturally in the Minecraft world. These mobs have 40 health points and can deal 12 damage to their target. Below is a screenshot of how they look in the game: 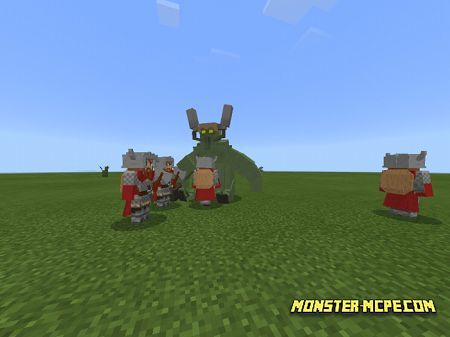 The aforementioned Viking ogre is very dangerous as it is another boss in the game. This creature is very hostile and has as much as 600 health points and can deal 21 damage to its target. These creatures will spawn asleep, so if you want to fight, then you need to hit or push him first, after which he will wake up and summon the Vikings.

Below you can see what this creature looks like: 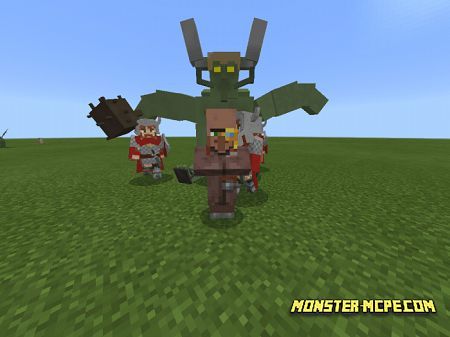 Let's now look at the new items, blocks, and ore that will be added to the Minecraft world. The first is a new type of block called belger. This block and ore are fairly easy to find in caves. Get new ore and you can craft a new belger sword. 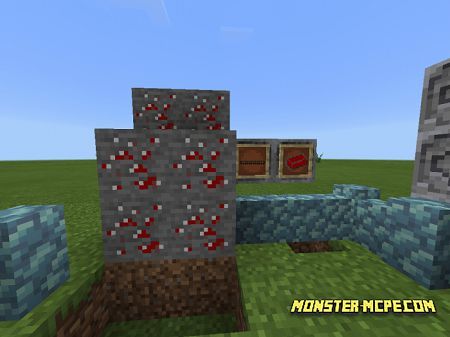 Also, below you can see the recipe for a new belger sword using a new ore and stick. The new type of sword can deal 9 damage to its target. 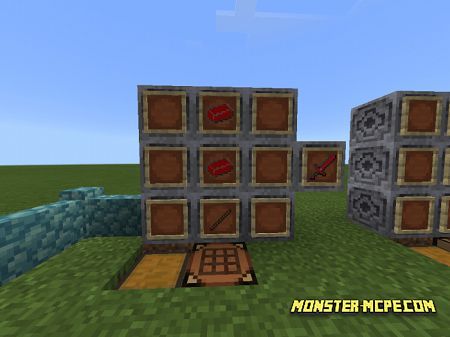 In addition to the belger sword, three other swords will also be added to the game, one of which is the sword of the eye. To craft this type of sword, you need to use the eye of the cyclops. This type of sword deals 10 damage to its target. 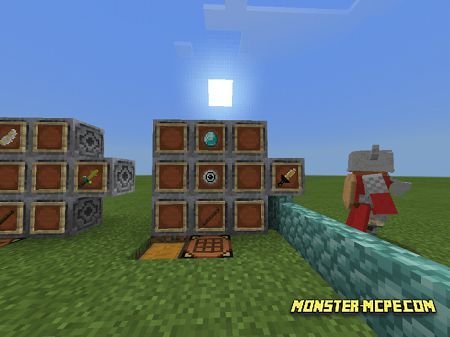 The next type of sword is called the pegasus sword. To craft this sword, you need to use pegasus feathers and a stick. This type of sword deals 8 damage to its target. 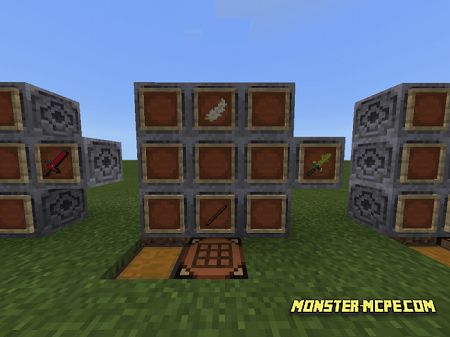 Related News:
Nickelodeon Add-on 1.16+
This is perhaps one of the first add-ons that add characters from the
Cave Enhancements Add-on 1.16+
We present to your attention a large and fairly voluminous Cave
Jurassic Addon
Jurassic Addon - this is a fairly large and voluminous addition that,
World Animals Add-on 1.16/1.15+
Would you like to add more different animals to the Minecraft world?
Comments (0)
Commenting