2. Gun which is called Potato, this type of portal weapon has the same properties as a simple one, but there is also an additional feature in that when used, it plays a sound similar to Glados (a character in the computer games Portal/Portal 2):

After the player has crafted the portal weapon. This weapon will be blue, and only when used will it change to orange. 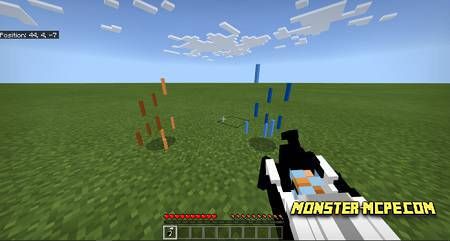 What color your weapon will shoot you will see on the weapon that you will use.

New weapons can also pick up certain types of blocks. 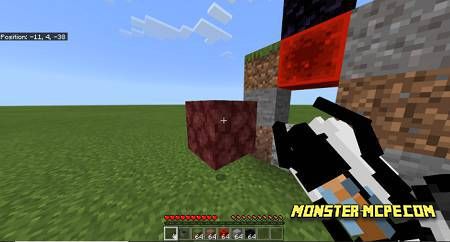 To do this, the player needs to hold a new weapon (except for the last Type RickandMorty), sneak, be located facing a certain block, and (for mobile devices) hold the screen; for a PC, just click with the mouse (left button) on the desired block. After the performed actions, stop sneaking.

In order for the player to place the selected block, it is necessary to place the floating block in the desired place and use it to sneak. A block will be placed in the place you have chosen, and if there is also another block there, your chosen blocks will break other blocks. 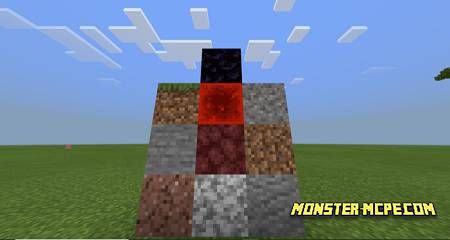 As mentioned earlier, players can only pick up certain types of blocks, namely:

Another unique feature is the creation of such a mystical sphere as the Black Hole! The black hole absorbs everything that is nearby, items, creatures, and even players. If a player falls into a black hole, he will immediately die.

Also, in the game, you can find a simple and understandable guide on how to use new types of weapons in case you get a little confused.


Related News:
More Tools Add-on 1.18
Has it ever happened that you have a lot of resources in your
Cave Enhancements Add-on 1.16+
We present to your attention a large and fairly voluminous Cave
Golden Utilities: Transport Any Mob and Much More Add-on
Have you ever faced the problem of transporting mobs or maybe you
Minecraft PE 1.18.0 for Android
We present to your attention the new version of Minecraft Pocket
Comments (0)
Commenting