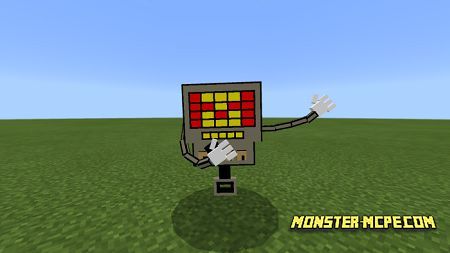 A new addon that adds to the world of Minecraft a new character whose name is Mettaton. This is a fairly well-known metal robot from a game called Undertale. This addon will be interesting both for fans of this game and for those who would like to see a new character in the world of Minecraft. The creator of this add-on is a big fan of the Undertale game, so he decided to transfer his favorite character to the Minecraft world.

The addon adds a new character whose name is Mettaton. This mob is box-shaped. The new mob has 9999 HP and damage power 6. It doesn't like water. Movement speed is lower than the player’s character.

When this mob appears, a special soundtrack will play. If you want to turn it off, use the /stopsound command.

Related News:
More Tools Add-on 1.16+
Has it ever happened that you have a lot of resources in your
Hog's Power Add-on 1.17/1.16+
This add-on adds new blocks of energy power to your Minecraft world.
Battle Box (Fan Made) Map
Have you ever heard of an event like the Minecraft Championship (MC
Redstone Mechanic Evolution 1.14/1.13+
A new add-on that adds new creatures to the game. This add-on, unlike
Comments (0)
Commenting