Do you like the characters from the game Among Us? For those who do not know or have not yet played this cult game, this is a multiplayer computer game made with a sci-fi theme, the task of the game is to randomly divide the players into two teams, one of which is the crew members, and the second is the traitors hidden among them. The crew members do not know which of their comrades is the traitor and can execute any character by vote, trying to identify the traitors using the method of deduction.

Crew members win if they manage to get rid of the traitors, or at least complete all the puzzle missions offered to the crew. Traitors also benefit if they manage, without getting caught, to secretly kill a sufficient number of crew members or to bring to completion major sabotage, namely to blow up the reactor. Below you can see how the characters of this game look approximately. We present you with a new Among Us Suits addon that allows all players to use the famous costumes of the characters in the game Among Us.

You can use this addon for role-playing games or just become a team Among Us with your friends, that is, crew members. Players can use the new suits as new armor as they also have their own level of protection for each individual part of the suit. Also, players can change the color of the suit and choose one of the available twelve. You can learn more about the features of the new addon below.

As mentioned earlier, this addon adds a new suit that can serve as a new armor for players with certain protected characteristics. In general, in the game, players can use one of twelve suits of different colors. Use the crafting recipes below to craft a white crew member suit in survival mode:

In case the player wants to change the color of his suit, he needs to use the stonecutter of the white suit of the crew member and select the desired color. One of the additional parts of the costume is a mini crew member that will be worn over the head as this is such a unique hat. To do this, the player needs to use a leather helmet. Below you can see screenshots of how it works: 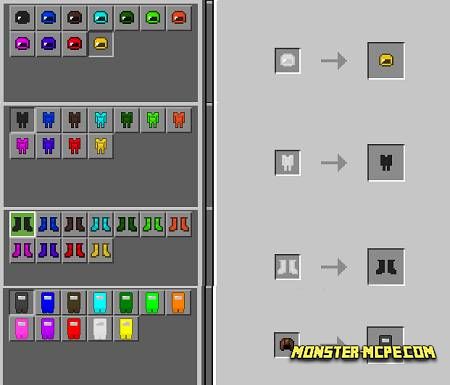 Also, below you can see an example of how to properly use the crew member's suit in the inventory slots: 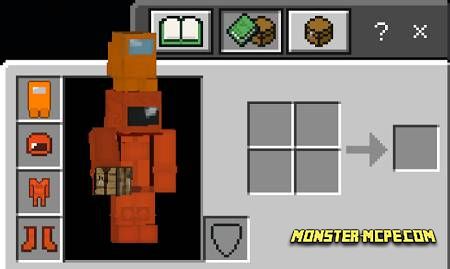 We draw your attention to the fact that the main feature of this suite is its protection, having a full set of the suit, you will have the maximum level of protection that cannot be broken by other creatures. Therefore, do not worry about repairs. Also, players can use additional enchant for this costume.